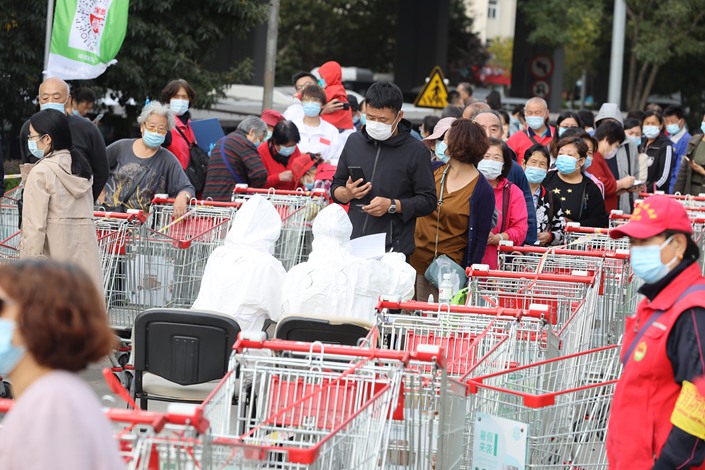 Authorities in the Chinese city of Qingdao plan to test millions of people for the coronavirus following a dozen new cases, a rare flare-up in a country that has brought infection rates down to almost zero.

As of 11 p.m. on Sunday, the eastern port city had confirmed six cases, while a further six had tested positive for the coronavirus but were asymptomatic, according to a notice (link in Chinese) published Monday on the municipal health commission’s website. China does not count cases as confirmed until the patient shows Covid-19 symptoms.

The cluster is “highly associated” with the Qingdao Chest Hospital in the center of the city, the notice said, adding that more than 110,000 medical workers, hospital patients and other people had tested negative for the virus. Officials plan to test the entire city of 9 million within five days.

The outbreak is the second time in as many months that Qingdao has logged new coronavirus cases. In September, two port workers tested positive for the pathogen after handling frozen seafood.

Although China has controlled its coronavirus epidemic, local outbreaks still sometimes occur. The capital Beijing, the northeastern city of Dalian, and several smaller border cities have all taken measures like community testing and local lockdowns to combat resurgent caseloads after the initial wave petered out.

On Monday, one of China’s top epidemiologists, Zhang Wenhong, wrote on his official Weibo microblog that there were “commonalities” between Qingdao’s mass testing initiative and the Great Barrington Declaration, a controversial proposal published earlier this month by British and American disease experts that advocates managing the pandemic through targeted shielding of vulnerable groups instead of blanket lockdowns.

“Long-term maintenance of the world’s shutdowns is bound to bring about adverse health, economic and political outcomes,” Zhang wrote (link in Chinese). “Until a vaccine becomes available, continuing to take lockdown measures will cause irreparable damage, with vulnerable groups bearing the brunt.”

Zhang added that rapid, large-scale mass testing campaigns in cities like Qingdao allowed the country to maintain a “dynamic zero” of new Covid-19 cases at minimal cost. City authorities have not mentioned the possibility of local lockdowns.

The declaration’s three authors, who are professors at Oxford, Harvard and Stanford universities, argue that protecting those most at risk mitigates the adverse effects of lockdowns on public physical and mental health — especially for the underprivileged — and helps to “reduce the herd immunity threshold.”

But it has drawn criticism from other specialists who claim that the strategy is not supported by scientific evidence and undermines public health advice. They also question its links to the American Institute for Economic Research, a libertarian think tank that has supported studies attacking the scientific consensus on manmade climate change.

As of Sunday, the Chinese mainland had recorded 80,714 Covid-19 infections and 4,634 deaths, according to an online statement (link in Chinese) by the National Health Commission.