The Mystery Link Between China’s Covid-19 Outbreaks and Seafood 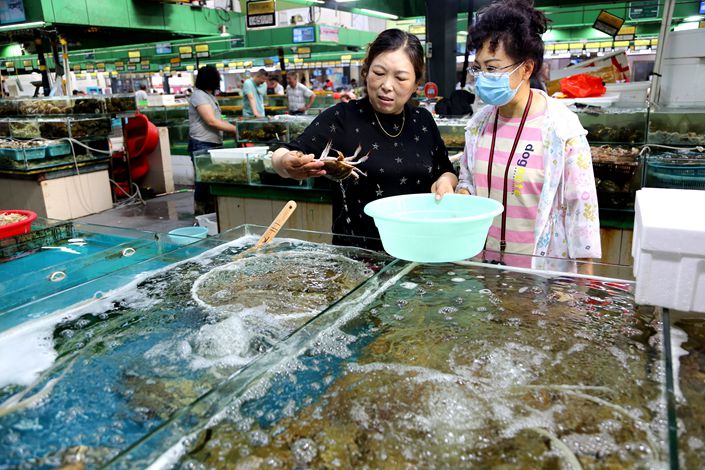 A new Covid-19 outbreak in a city in Northeast China has refocused attention on the role of the seafood industry in spreading the coronavirus.

Dalian, a port city of 6.7 million people in Liaoning province, has recorded 44 Covid-19 infections since Wednesday after months of near-zero daily rises.

According to announcements by municipal authorities, more than 70% of the sickened people either work at the same seafood company or are related to those who do.

The cluster has drawn comparisons to the country’s initial Covid-19 outbreak in Wuhan and a flare-up in Beijing last month, both of which were linked to wholesale markets where aquatic products were sold.

The company at the center of the latest outbreak, Dalian Kaiyang World Seafood Co. Ltd., is involved in catching, processing, researching and storing aquatic products, as well as the import and export trade, according to its website (link in Chinese).

It operates a 60,000-square-meter facility in Dalian Bay, one of Asia’s largest commercial fishing hubs.

It remains unclear how the facility was contaminated. Officials are exploring two main theories: either that the virus was introduced into the factory by an infected person, or that it spread to workers from contaminated seafood products imported from overseas.

According to government notices, officials at Dalian customs found traces on July 3 of the coronavirus in a sample taken from the inside of a container used to import frozen shrimp from Ecuador.

On July 10, the city’s health commission reported one imported Covid-19 case and three asymptomatic infections, all of whom were Russian sailors who had docked the previous week after traveling from the far eastern city of Vladivostok. Officials said they had been isolated for treatment.

The “contaminated imports” hypothesis chimes with the suspected cause of Beijing’s second coronavirus wave, which infected at least 335 people from June 11, according to the capital’s health commission (link in Chinese).

That cluster centered on the Xinfadi wholesale market in the capital’s southwestern district of Fengtai and prompted officials to lock down some residential compounds, restrict travel and reimpose restrictions on businesses.

Samples taken from the site later showed high levels of coronavirus contamination in areas of the market where aquatic and bean products were sold.

In Wuhan, where nearly 4,000 people died of Covid-19 earlier this year, the outbreak was initially linked to the Huanan Seafood Wholesale Market, although that theory has since been disputed.

Scientists do not think SARS-CoV-2, the virus that causes Covid-19, can infect much marine life. In April, researchers affiliated with the United Nations and the Chinese Academy of Fishery Sciences published an article in the journal Asian Fisheries Science saying there was “no evidence” that fish, crustaceans, mollusks or amphibians could contract the virus and pass it to humans.

However, Chinese public health officials have suggested the pathogen may spread to people from the containers and packaging in which imported food is transported.

Zhu Hua, a virus expert at Hong Kong University, told Caixin that many viruses can remain infectious in subzero temperatures.

“The virus samples we use in the laboratory, which are stored in a liquid nitrogen environment at minus 80 degrees [Celsius], might live for decades,” Zhu said. “Even at minus 30 degrees, they can live for a few years.”

Dalian’s municipal health commission announced (link in Chinese) six new confirmed cases on Monday. The city has banned (link in Chinese) communal dining and urged people who have recently visited the seafood company or its affiliates to submit themselves to medical personnel for testing.

On Tuesday, Beijing and the northeastern provinces of Jilin and Heilongjiang (links in Chinese) both reported new Covid-19 cases linked to the Dalian outbreak.