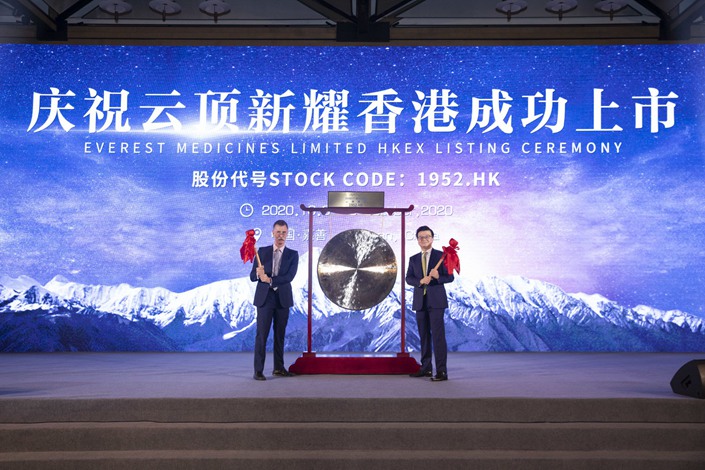 The China-based biotech company offered a total of 63.5 million ordinary shares at a price of HK$55 apiece, the upper end of the firm’s proposed range between HK$50 and HK$55.

Everest Medicines, which had filed for the IPO this July, develops a portfolio of eight clinical-stage drug candidates across oncology, immunology, cardiorenal disease, and infectious disease to address unmet medical needs, initially in China and emerging Asia Pacific markets.

As the firm has yet to generate any revenue, its net operating losses stood at 127.2 million yuan ($19 million) and 176.1 million yuan ($26 million) in 2018 and 2019. It is expected to create revenue from product sales after it obtains regulatory approval and commercialize one of its current or future drug candidates.

“This [Everest’s IPO] is not just a milestone for Everest, but also one for CBC,” said Fu Wei, CEO of CBC Group and chairman of Everest Medicines. “… and we look forward to continuing to support them as they look to transform China’s burgeoning biotech industry.”

Everest Medicines intends to use the majority of the net proceeds of about HK$3.13 billion to fund ongoing and planned clinical trials, preparation for registration filings, and commercialization of four anchor products.

The firm will also use part of the capital to support business development activities and the expansion of its drug pipeline, among others. Before the listing, Everest had closed $310 million in a series C round across two preferred equity financing tranches in June, including a $260-million series C2 round and a $50-million series C1 round.

The series C2 round was led by Hong Kong-based Janchor Partners and co-led by Boston-based multi-stage investment manager RA Capital Management, and Asia-focused PE major Hillhouse Capital, while the series C1 round consisted of a $50 million investment from Chinese state-owned investor Jiashan SDIC.