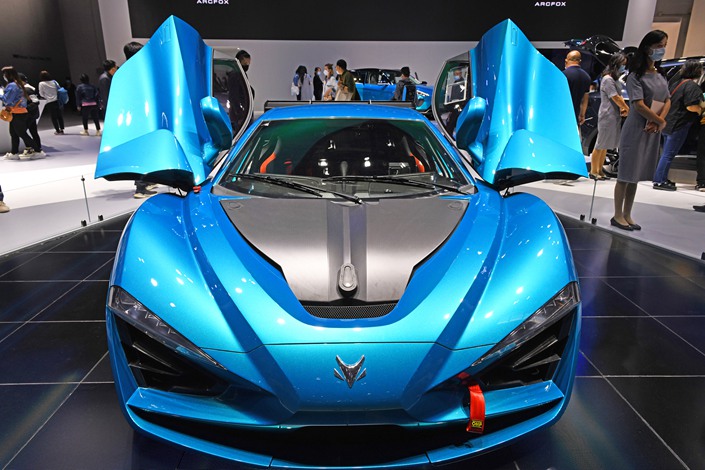 The state-owned giant has plans to launch a high-end new-energy vehicle (NEV) brand, Caixin has learned, in the latest local challenge to U.S. veteran Tesla Inc. in one of the world’s biggest electric vehicle (EV) markets.

The Shanghai-based carmaker’s NEV brand will develop a completely new platform for car assembly, catering to the different requirements of alternative energy cars, people inside the company told Caixin on Monday, without revealing any time frame for the launch.

More and more Chinese carmakers are trying to compete against the likes of titan Tesla, which has established a secure foothold in China since it opened its Shanghai mega-factory last year.

News of the plan builds on an announcement by SAIC in July that it would “independently develop an exclusive framework for electric vehicles.” It also said it would adopt 5G networking, artificial intelligence and cloud computing capacity to win an edge over its rivals in the autonomous driving field.

SAIC has taken a big hit from Covid-19, delivering a total of 3.61 million vehicles in the first nine months, 18% less than same period last year. Its revenue fell 24.6% to $283.7 billion in the first half, according to the company’s financial report.

The pandemic-induced economic fallout has ratcheted up pressure on the already competitive carmaking industry, crowded with homegrown companies racing to compete against the Tesla giant. On Sept. 1, Tesla’s market cap surpassed $500 billion, an amount greater than the combined market value of Ford, General Motors, Daimler, Volkswagen and Toyota.

On top of that, big cuts to state subsidies for EV purchases have eaten into the revenue of Chinese carmakers, with BAIC BJEV experiencing a 78.68% drop in sales and BYD Auto Co. Ltd.’s figures almost halved.