By An Limin, Zheng Lichun, Zhang Erchi and Han Wei 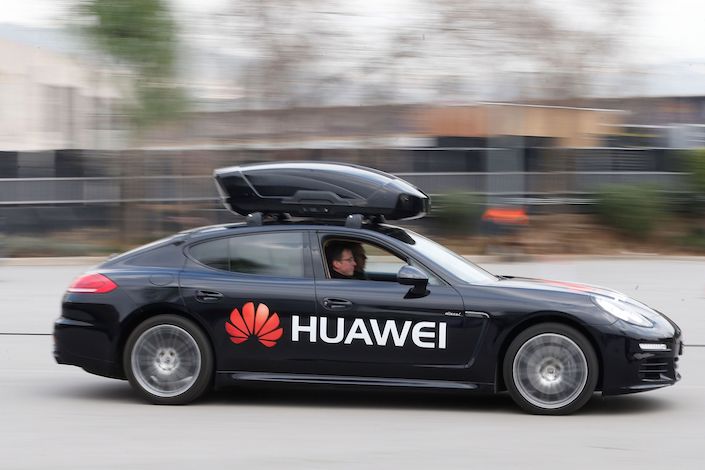 A Porsche Panamera car driven by the Huawei Mate 10 Pro smartphone outside the Camp Nou stadium in Barcelona during the 2018 Mobile World Congress.

From Alibaba-backed Xpeng to Nvidia partner Li Auto, there are plenty of Tesla wannabes in China that aim to copy the American electric-car maker’s success and catch the tide of an industry in revolution.

But the real Tesla challenger may be Huawei Technologies Co., the telecom giant at the center of China-U.S. tech frictions, some experts say.

“If you look at the stock price of Tesla, you will know where the future of automobiles lies,” Xu Zhijun, a rotating chairman of Huawei, said in a public lecture in 2019. On Sept. 1, Tesla’s market cap surpassed $500 billion, an amount greater than Ford, General Motors, Daimler, Volkswagen, and Toyota put together.

Xu is among many industry experts who think Tesla Inc. is pioneering the next automobile-industry revolution, powered by electricity and artificial intelligence (AI), which will lead to a fundamental change in the design of cars and the structure of the industry. But Xu’s comment also shed light on the next business focus of Huawei as it struggles with U.S.-led sanctions choking its core businesses.

Huawei’s move into auto-related technology research goes back to 2013 when the company quietly started a unit to develop internet-based auto applications. In April 2019, the company made its first appearance at the Shanghai international auto show, declaring a plan to become an auto parts supplier. One month later, Huawei officially set up an auto business unit focusing on smart car solutions.

Although founder and Chairman Ren Zhengfei has repeated Huawei had no plan to manufacture cars, the company has built up capacity to produce almost everything needed for smart cars.

“Anything that Tesla can do, we can do,” Xu said in an October interview.

A person close to the company said Huawei aims to become a one-stop supplier of all software and hardware for smart cars and seeks a dominant say in the industry. There will only be two or three such players globally, the person said.

Huawei has been aggressively recruiting talent from major auto suppliers such as Germany’s Robert Bosch GmbH (Bosch), sources said. If needed, Huawei can quickly set up a team with thousands of professionals, a person said.

In early September, Huawei unveiled the 2.0 version of its homegrown Harmony operating system (OS), which will power Huawei’s new smartphones starting next year. As an alternative to Google’s Android OS under the U.S. business ban, the Harmony OS was installed in Huawei’s smart cockpit platform HiCar, allowing people to control most autonomous functions in their vehicles via Huawei cellphone.

Huawei needs the new auto business as its main telecom equipment and cell phone businesses face strengthening headwinds globally. A Trump administration ban that took effect last week cut off foreign supplies of semiconductors, software and other materials that are key to powering Huawei’s mobile phones and 5G base stations.

Huawei wants to do everything related to silicon in cars, a person close to the company said. Ren is pushing forward the auto business regardless of cost, this person said.

“Huawei is likely to become a Chinese version of Bosch” and pose threats to other major auto suppliers, an executive at a leading automaker said.

Chen Yudong, China president of Bosch, said Huawei is a new entrant that could be a partner of Bosch as well as a potential competitor.

Automakers are concerned that Huawei will eventually build its own cars and revamp the entire industry.

The auto industry faces unprecedented changes in the next two to three years as AI and autonomous driving technologies are deployed, a senior industry expert said.

Huawei set its sights on internet-based auto technologies in 2013 when electric vehicles became an investment hotspot in China. Supportive government policies encouraged investment to flood into the sector, including some attempts that later failed such as LeEco founder Jia Yueting’s auto business.

Rumors that Huawei would launch a car-building business have been around for years, although Ren repeatedly denied them.

Xu told media in 2019 that there wasn’t a consensus inside Huawei as of late 2018 about whether the company should push further into the auto market. Richard Yu, CEO of Huawei’s consumer business group, is one of the supporters of the auto business as he wants to follow Apple Inc. in electric car development.

But Ren was lukewarm, sources said. In a 2019 interview with several media outlets, Ren said “Huawei will never build cars.” Huawei will focus on its core business and not enter areas where it can’t effectively compete, Ren said.

At that time, Huawei thought the time for smart cars was not ready and the company should continue focusing on electronics and communication businesses where its strengths lie and avoid direct competition with auto parts suppliers, sources said.

Despite the insistence on staying away from car building, Huawei has quickly stepped up development of auto software and electronic modules that could equip vehicles with Huawei’s 5G wireless communication technologies.

As of September, more than 150 models produced by 20 automakers adopted Huawei’s HiCar smart cockpit platform, which is similar to Apple’s CarPlay and Google’s Android Auto, the company said. The number of models will exceed 500 by 2021, Huawei said.

Huawei is moving toward car building in a partnership with BAIC BluePark New Energy Technology Co. Ltd, the electric-car unit of BAIC Group. The first model co-developed by the two companies is called the N61. A prototype of the car is set to start road tests in late 2020 and hit the market in the last quarter of 2021.

Huawei’s partnership with BAIC BluePark started in late 2018 and was expanded to full-range business cooperation in January 2019. Under the partnership, the two companies jointly set up a lab, bearing their own part of research costs. They would share revenue based on their inputs when products go to market, according to Liu.

A BAIC source said Huawei is counting on the N61 project to create a standard system that can be applied to other automakers.

A person close to Huawei said the company has enough chip inventories to support auto research and small-scale production despite the U.S. trade ban.

Most industry insiders interviewed by Caixin said they think Huawei is capable of becoming a major player in the auto industry. It may become the provider of a commonly used technology platform for the industry, like the Android OS for smartphones, they said.

An auto company executive familiar with Huawei said the company is doing everything related to smart cars but will figure out the most valuable part to focus on, which may be the operating system and computer chips.

Compared with conventional automakers seeking transformation in the smart car era, Huawei is more likely to think outside the box and create innovative products like Tesla, an auto industry source said.

The key is how Huawei will push forward its strategy and balance its partnership with auto companies, as people are more concerned about its ambitions than its abilities, experts said.

A person close to Huawei said most automakers have mixed feelings when working with Huawei. On one hand, they want to embrace Huawei’s technology. But on the other, they are hesitant to deepen partnerships because of worries that Huawei will grow into a potential threat.

Industry analysts said they expect the next car building boom to come in two to three years as the industry transforms to adopt higher levels of intelligence, an opportunity that Huawei may tap.