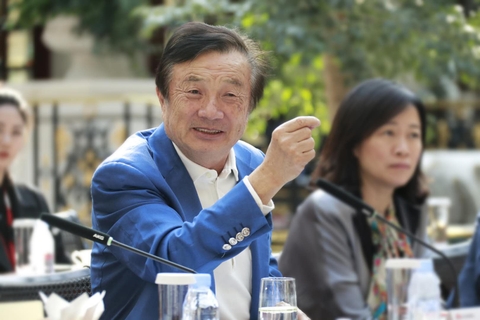 Ren Zhengfei held a second interview with media in one week as the company faces a series of setbacks. Photo: VCG

Ren Zhengfei, the reclusive founder of Huawei Technologies Co., has remained silent in public for years even though his company has regularly made global headlines for good news and bad.

In a rare move, Ren held two interviews with media this week attempting to restore market confidence in the Chinese Tech giant and ease concerns over recent setbacks.

Earlier this week, the 74-year-old Ren dismissed accusations against the company of spying for the Chinese government in a meeting with international media. It was believed to be his first such interview since 2015.

In his Thursday meeting with journalists, Ren said Huawei still has business allies in the U.S., vowed to increase investment in network security, predicted that the worldwide rollout of next-generation wireless technology will be slow, warned against investment bubbles in artificial intelligence and projected slower revenue growth this year.

Bad news has piled up recently for Huawei. The company faces constant questions abroad about its ties with the Chinese government and the potential of security threats embedded in its technology. Now U.S. federal prosecutors are pursuing criminal charges against Huawei for allegedly stealing trade secrets, The Wall Street Journal reported Wednesday.

The company has been at the center of an international firestorm since its Chief Financial Officer Meng Wanzhou was arrested Dec. 1 in Canada on the request of U.S. authorities. Earlier this month, Polish authorities arrested then-Huawei executive Wang Weijing on charges of conducting espionage. Huawei subsequently terminated Wang’s employment.

Ren didn’t comment on the Poland incident Thursday but said Huawei will follow legal procedures to deal with the case of Meng, who is also his daughter.

Meng was arrested in Vancouver on the same day that Chinese President Xi Jinping and U.S. President Donald Trump met in Argentina to discuss trade issues following the G20 summit in Buenos Aires. Ren told media that Meng was en route to Argentina for a conference that Ren attended. Previous media reports said Meng was changing flights in Canada on the way to Mexico.

Meng was released on bail 10 days after her detention and is waiting in Vancouver for the extradition procedure, which may lead her to stand trial in the U.S. on charges related to alleged violations of U.S. sanctions against Iran.

Ren said he has often spoken by phone with Meng, chatting and joking.

Discussing recent setbacks with the U.S., Ren said Huawei still has supporters and partners in U.S. business circles despite the hardline stance of politicians.

Ren praised Trump’s achievements in cutting taxes to benefit U.S. businesses, but he said the president’s aggressive approach to dealing with other countries will hurt foreign investors and sap the economy’s long-term growth.

Ren, a former military officer, started Huawei in 1987 and expanded the company to become one of the world’s largest telecom network equipment suppliers. But Huawei has long been dogged by accusations that the company spies on other countries for the Chinese government amid its overseas expansion.

Ren told media Thursday there is not necessarily a correlation between business model and ideology. People should not confuse his personal beliefs on communism with Huawei's business. Huawei serves more than 3 billion people in 170 countries and has never had a major information leak in 30 years, he said.

The company plans to invest $100 billion in the next five years to restore its network and further enhance security, Ren said.

But Huawei has been struggling with stiffer headwinds recently as several countries have banned its technology in their development of next-generation 5G wireless telecom networks. U.S. lawmakers have recently proposed legislation that would ban the sale of U.S. chips and other high-tech components to Chinese telecom-equipment makers that violate U.S. sanctions, the latest pushback by Western countries against Huawei and its rival ZTE Corp.

Ren said Huawei has been well prepared in the face of the difficulties. “The world is huge,” he said. “Some rejection doesn’t mean we will be rejected elsewhere.”

Despite rising expectations for 5G worldwide, Ren said the rollout of the new technology will be slow and will require patience.

Citing cooling economic growth, Ren said Huawei is likely to see slower expansion in 2019 with revenue rising less than 20%. Huawei’s 2018 revenue was projected to increase 21% to $108.5 billion. Ren said Huawei will focus on its core business and not enter areas where it can’t effectively compete.

Ren warned of bubbles in the artificial intelligence sector, citing China’s lack of basic research. But he voiced high expectations for cloud computing. Huawei set up its Cloud Business Unit in 2017, taking aim at similar services of Alibaba Group and Tencent Holdings. Ren said he expected the department to grow bigger and more independent in 2019. The market for cloud services is huge, he said.

The Huawei founder also called for greater protection of intellectual property, saying it will benefit China’s growth in the long run. According to the Wall Street Journal, Huawei is suspected of stealing trade secrets related to a robotic device made by T-Mobile U.S. Inc.

Ren didn’t comment on the specific case but said Huawei has paid absolute respect on others’ intellectual property rights.