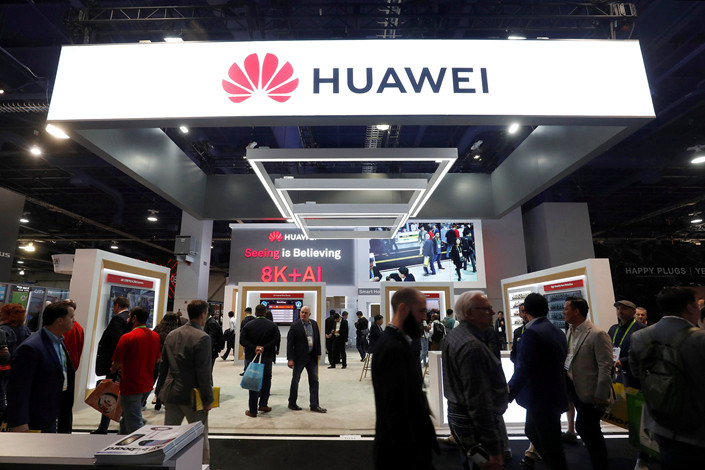 A Huawei booth is seen at the Consumer Electronics Show 2019 in Las Vegas, Nevada, on Jan. 9. Photo: VCG

* Telecommunications Denial Order Enforcement Act would automatically mete out punishment for any Chinese violator of U.S. sanctions or other export controls

* New legislation marks the latest pushback by Western countries against Huawei and ZTE, which have also come under fire in a Washington-led campaign questioning their products’ security

(Beijing) — U.S. lawmakers have proposed legislation that would ban the sale of U.S. chips and other high-tech components to Chinese telecom-equipment makers that violate U.S. sanctions, formalizing a process that nearly bankrupted one of China’s leading manufacturers last year.

Sponsors of the legislation came from the Republican and Democratic parties in both the U.S. House of Representatives and the Senate, the federal government’s two main lawmaking bodies, according to statements posted on websites of the four lawmakers backing the measure. Those sponsors included Senate and House Republicans Tom Cotton and Mike Gallagher respectively, and Senate and House Democrats Chris Van Hollen and Ruben Gallego. The House and Senate would both have to pass the bill and U.S. President Donald Trump would have to sign it for the legislation to become law.

The legislation’s introduction comes against the backdrop of a series of probes into Chinese firms that sold products containing American-made components to Iran in violation of earlier sanctions against the country. Two of the highest-profile cases have involved leading networking-equipment makers Huawei Technologies Co. Ltd. and ZTE Corp.

ZTE’s case dates back nearly three years, when the U.S. first determined the company had violated the anti-Iranian sanctions. After reaching a settlement in that matter, including a $1.2 billion fine, the U.S. determined in April that ZTE had violated some parts of that agreement. As a result, it banned the sale of U.S.-made components to ZTE, sparking a crisis that nearly put the company out of business before the two sides reached another new settlement.

Huawei is now embroiled in a similar crisis that last month saw its chief financial officer detained in Canada for possible extradition to the U.S. to face charges related to alleged violations of the Iran-related sanctions.

The new legislation, called the Telecommunications Denial Order Enforcement Act, would automatically mete out punishment similar to last year’s ban on ZTE for any Chinese violator of U.S. sanctions or other export controls. It would require that penalties remain in place “until a pattern of compliance and cooperation over the course of a year proves that policies surrounding systematic law-breaking by Chinese telecommunications firms have been changed,” according to the announcement.

The legislation would also give the U.S. president limited powers to modify penalties for violators, and would highlight Congress’ role in execution of such punishments. Those conditions follow a separate clash between Congress and the Trump administration during last year’s case involving ZTE. At the time some lawmakers opposed statements from Trump saying he might try to modify the ban on ZTE as part of broader trade talks with China.

While ZTE and Huawei have taken most of the headlines for their alleged transgressions, other Chinese companies have also faced similar accusations. In December, Chinese oil-field services firm Yantai Jereh Oilfield Services Group Co. Ltd. agreed to pay nearly $3 million to settle a similar dispute involving violation of anti-Iranian sanctions, according to the U.S. Treasury Department.

The new legislation marks the latest pushback by Western countries against Huawei and ZTE, which have also come under fire in a Washington-led campaign questioning their products’ security. The U.S., Australia and New Zealand have all banned the use of equipment from the two firms in their latest 5G telecom networks, and a number of other major countries like Britain and Germany have expressed similar concerns.

Huawei has repeatedly denied that its products pose any security risk, or that it has ties with Beijing that can be used for spying.