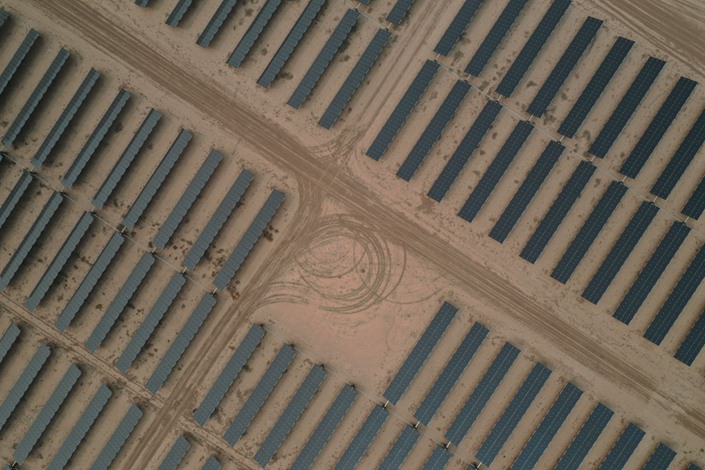 Photovoltaic panels are seen near the U.S.-Mexico border on Sept. 11. Photo: Bloomberg

Solar power’s “economics just got worse,” Gordon Johnson, an analyst at GLJ Research, said in an interview. “Demand’s not going to be as strong.”

The Trump administration has pushed for a year to revoke the tariff exemption on so-called bifacial panels, but earlier efforts have been stymied. Its latest move, a proclamation issued Saturday, would scrap the exemption within 15 days — “unless there is a judicial intervention,” said Philip Shen, an analyst at Roth Capital Partners, in a research note.

The Solar Energy Industries Association, a Washington-based trade group, said it will “continue to explore all options for preserving” the tariff exclusion.

“The Trump administration decision this weekend to expand solar tariffs and evaluate an extension of those tariffs counters critical needs of our country right now, jeopardizing jobs, economic recovery in the face of a pandemic and a clean environment,” Abigail Ross Hopper, SEIA’s president and CEO, said in a statement.

In the proclamation, Trump said it’s necessary to revoke the bifacial exemption because the loophole has “impaired and is likely to continue to impair the effectiveness” of tariffs intended to bolster U.S. solar manufacturing. That’s why he also said it’s necessary to set tariffs at 18% starting in February, instead of reducing them to 15% from 20% as originally planned.

Trump authorized the U.S. Trade Representative to request that the U.S. International Trade Commission investigate whether action continues to be necessary to prevent “serious injury” to the country’s interests. In other words, an extension of the solar cell and module safeguard duties “beyond the current expiration in February 2022” is possible, according to Shen.

Trump in early 2018 approved four years of tariffs, starting at 30% and to be reduced by 5 percentage points in each subsequent year. The tariffs were a step toward following through on a campaign promise to get tough on China, which dominates solar panel manufacturing, and boost the U.S. industry.

The Trump administration’s subsequent move in 2019 to grant bifacial panels an exclusion surprised many companies in the solar industry. While bifacial was considered a niche product, the tariffs had encouraged some new U.S. solar manufacturing, and duty-free module imports posed a threat. The administration soon began a push to revoke its own exemption, but efforts to do so have been blocked by a U.S. trade court.

Solar’s decline Monday may also have another driver — a recent rally by renewable-energy companies that stand to benefit from a potential Joe Biden presidency. “It’s textbook profit taking, and rightly so,” Pavel Molchanov, an analyst at Raymond James, said in an interview.