By Chen Xuewan and Flynn Murphy 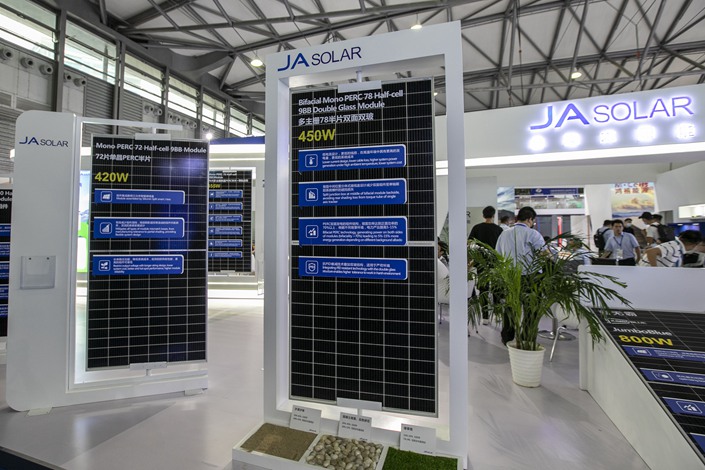 The impressive results suggest coronavirus-related force majeure warnings the company issued when it reported last year’s earnings in March may have been overblown.

The world’s largest solar-panel maker saw its profit grow 78% in the first half, mostly driven by sales overseas, suggesting that its own warnings about the pandemic’s impact on its business have failed to come true.

JA Solar Technology Co. Ltd., which is seen as a bellwether for China’s solar industry, posted profits of 701 million yuan ($101 million) on 10.88 billion yuan of revenue, a figure that was up 22.7% year-on-year. Overseas revenue made up the lion’s share at 7.57 billion yuan, an annualized increase of 32.5%.

The impressive results suggest coronavirus-related force majeure warnings the company issued when it reported last year’s earnings in March may have been overblown. The company made full year profits of 1.3 billion yuan in 2019 on revenue of 21.2 billion yuan.

JA Solar makes solar modules, also known as solar panels, as well as the individual solar cells that comprise them, and the components used to make solar cells such as silicon wafers. On Monday, the company also announced it would invest 1.64 billion yuan to expand its production capacity.

Founded in 2005 and listed on the Nasdaq in 2007, JA Solar left the U.S. exchange in 2018 in order to relist on the Shenzhen Stock Exchange, where it began trading in December. The firm makes most of its money from solar panels, which contributed 89.5% of its total revenue in the first half of 2020.

According to its website, the company ships to 120 countries and regions. While its main markets are still China, the U.S., Japan and Europe, JA Solar said Monday it was expanding into emerging markets around the world, and has two production bases in Malaysia and Vietnam.

The upbeat results come despite evidence the Covid-19 pandemic has been depressing photovoltaic demand abroad. The value of China’s solar panel and related exports shrank 10.1% in the first half of the year to $7.9 billion, according to the China Photovoltaic Industry Association, though European demand remained strong.

China’s solar industry has been undergoing a consolidation that has benefitted large firms like JA Solar, with the nation’s top 10 cell producers accounting for three-quarters of total production last month, up from some 55% at the beginning of the year.