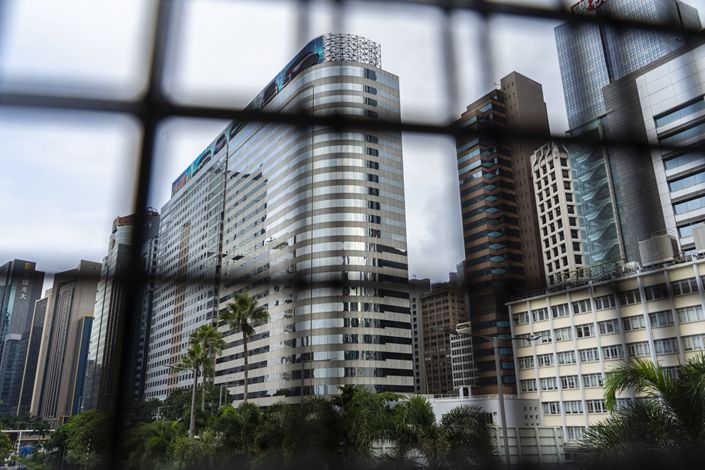 The China Evergrande Centre, center, is seen behind a fence in Hong Kong on Sept. 25. Photo: Bloomberg

(Bloomberg) — China Evergrande Group slumped in Hong Kong trading after raising far less than anticipated from a share placement, a sign of persistent investor skepticism toward the em-battled developer as it hunts for cash to repay a wall of maturing debt.

The world’s most indebted developer is under pressure from creditors and Chinese regulators to reduce its $120 billion mountain of liabilities, about $5.8 billion of which mature in the next two months. While billionaire Hui Ka Yan’s junk-rated company last month convinced several stra-tegic investors to waive rights to $13 billion of repayments, analysts at Bloomberg Intelligence said on Wednesday that tepid demand for the share placement may be a bad omen for its efforts to deleverage.

“Evergrande having difficulty placing $1 billion, which is not a very big amount relative to its size and previous fundraising, may show that its closest supporters are not willingly stepping in this time,” said Kerry Goh, chief investment officer at Kamet Capital Partners Pte. “Raising $555 million at a steep discount shows signs of desperation.”

Evergrande has about 10.6 billion yuan coming due on two domestic bonds maturing Friday, Bloomberg-compiled data show. The firm has already raised 2.1 billion yuan after pricing a five-year local note Wednesday and previously sold a 4 billion yuan bond in September, just before reports of a potential credit crunch emerged. Evergrande secured relatively cheap borrowing costs at 5.8% for both, the second-lowest coupon among its outstanding yuan bonds, the data show.

The developer’s liquidity challenges surged to the fore last month after reports that the company sent a letter to the provincial government of Guangdong warning that payments coming due in January could cause a cash crunch and potentially lead to cross defaults in the broader financial sector. News of the plea for help sent Evergrande’s stock and bonds tumbling even as the com-pany dismissed the concerns as based on rumors and “fabricated” documents.

“The share placement flop shows that Evergrande’s extensive liabilities remain an overhang for investors,” said Castor Pang, head of research at Core Pacific-Yamaichi Intl HK. “But at least Evergrande has proven that it still has different tools at its disposal to raise funds, and the key would be whether it can win support from banks.”

While buyers of Evergrande’s placement included big-name investors such as Norway’s sover-eign wealth fund and U.K. life insurer Legal & General Group PLC, the deal’s nearly 15% dis-count was wider than those offered by rival developers in other share placements this year. Sunac China Holdings Ltd. sold $1 billion of shares at a discount of 8.25%, while China Vanke Co. of-fered a discount of 4.8%.