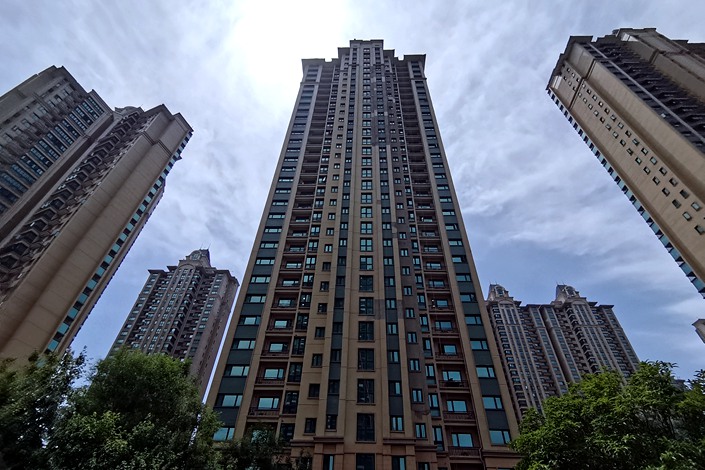 The bond boom also reflects developers’ need to replenish their coffers as regulators prepare to step up efforts to control debt and tighten financing.

China’s beleaguered real estate developers sold 324.7 billion yuan ($47.6 billion) of bonds at home and overseas from July 1 to Sept. 24, a record for a third-quarter period, as they scrambled to repay maturing debt and bolstered their cash reserves in preparation for an increasingly difficult funding environment.

The issuance was 14% higher than in last year’s full third quarter and the most for a July-September period in history, according to a report released Monday by the Beike Research Institute, a research platform owned by New York-listed real estate agency KE Holdings Inc. The splurge reflects the scale of debt that needed to be repaid in the third quarter — Beike data show about 286.2 billion yuan of bonds matured during the period, 54.4% more than in the second quarter, although debt coming due in the fourth quarter is expected to ease to 270.7 billion yuan.

The bond boom also reflects developers’ need to replenish their coffers as regulators prepare to step up efforts to control debt and tighten financing for the sector, moves likely to make it more difficult for builders to raise money from bond sales and to borrow more from banks.

Beike analysts said they expect the growth in bond issuance to slow down in the fourth quarter both on year-on-year and quarter-on-quarter bases partly due to the impact of regulatory action. That’s likely to add pressure on developers to boost property sales especially during the weeklong Golden Week (黄金周) holiday, which this year combines the Mid-Autumn Festival and the National Day holiday and starts on Oct. 1. Some builders may be driven to offer bigger discounts on unsold housing to raise more cash, they said.

Property developers are also bracing themselves for a new financing directive that regulators plan to impose on the industry next year after an initial period of testing on selected companies. Twelve top real estate firms were summoned to a meeting on Aug. 20 to notify them of a “three red lines” (三条红线) policy that sets limits on their borrowings: a liability-to-asset ratio (excluding presales) of no more than 70%; a net debt-to-equity ratio of less than 100%; and cash holdings at least equal to short-term debt, according to information circulated online that Caixin has confirmed with knowledgeable sources.

Beike found that among 70 property firms it analyzed, only six did not cross any of the three red lines, while 24 traversed one and 21 overstepped two, based on their mid-year financial statements. But 19 firms including three of the country’s top 10 developers — China Evergrande Group, Sunac China Holdings Ltd. and Greenland Holdings Corp. Ltd. — crossed all three red lines, the report showed.

Heavily indebted Evergrande is said to be seeking government support for its property arm’s backdoor listing plan, according to a letter circulating online last week. But the company denied the authenticity of the document and said it had reported the matter to the police. At the end of June, the Shenzhen-based developer’s total borrowings amounted to 835.5 billion yuan, of which 395.7 billion yuan was due to mature in less than a year, the company’s unaudited mid-year financial report showed.