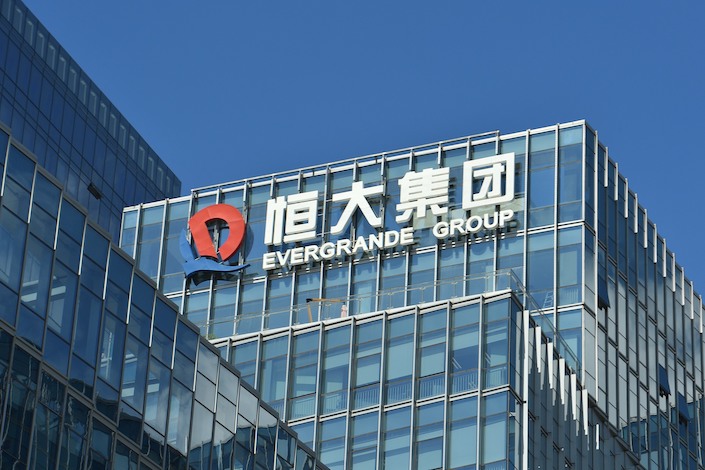 A letter circulating online Thursday showed Chinese developer Evergrande Group seeking government support for a corporate restructuring. But the debt-ridden company denied the authenticity of the document and said it reported defamation to police.

The letter dated Aug. 24 purportedly was sent from Evergrande Group to the Guangdong government, warning that the developer could trigger a series of risks in the financial system if it fails to complete the asset restructuring. The company said its cash flow may collapse as it may need to repay 130 billion yuan ($19 billion) to strategic investors, the letter said.

“The documents and pictures are fabricated and are pure defamation,” Evergrande said late Thursday in a statement to the Hong Kong Stock exchange, where its shares are traded. The company said it will take all legal actions to protect its legitimate rights and interests.

However, a close look at the debt situation of the nation's largest developer by assets and its long-delayed backdoor listing on the Chinese mainland market indicates the risks exposed by the letter may not be groundless.

Evergrande was one of the 12 top developers that regulators summoned to a meeting Aug. 20, notifying them of a pilot program aimed at limiting real estate companies’ ability to take on more debt.

At the meeting, the regulators conveyed a “three red lines” policy setting limits on bank borrowings by developers: a liabilities-to-assets ratio (excluding presales) of no more than 70%; a net debt-to-equity ratio of less than 100%; and cash holdings at least equal to short-term debt.

Companies that have crossed all three red lines will be banned from taking on more debt, and Evergrande had breached all three thresholds. As of June 30, Evergrande had a liabilities-to-assets ratio of 83%, a net debt-to-equity ratio of 159%, and a cash ratio of 0.6, according to the company’s unaudited mid-year financial report.

Over the years, as a result of highly leveraged expansion, Evergrande has accumulated nearly 900 billion yuan of debt with an average cost of nearly 9%, meaning it needs to pay out more than 80 billion yuan of interest each year.

Since the August meeting, regulators have started to go through the 12 developers’ overall debt situations and suspend new loans to them, several bankers told Caixin.

The numbers show only Evergrande’s liabilities on the balance sheet. In recent years, real estate companies have often used accounting methods to move debts around and expand off-balance sheet liabilities. Its actual overall debt could thus be even larger.

It’s also a common practice for real estate enterprises to issue asset-backed securities (ABSs), which can be removed from the balance sheet. Evergrande has more than 10 billion yuan of ABS liabilities due in 2020, according to Tianfeng Securities Co. Ltd.

Evergrande said in late 2016 it would carry out a so-called backdoor listing in Shenzhen, where valuations are usually higher than in Hong Kong, by injecting almost all of the property assets held by its unit Hengda Real Estate Group Co. Ltd. into the Shenzhen-listed Shenzhen Special Economic Zone Real Estate & Properties Group Co. Ltd. But the listing plan has yet to obtain regulatory approval.

Suning recently said it would request that Evergrande buy back its 20 billion yuan of equity if the developer can’t get listed in the A-share market by the end of January next year.

According to the letter denied by Evergrande, if the company has to repay 130 billion yuan to these strategic investors, its liabilities-to-assets ratio would rise to more than 90%.

Earlier this month, Evergrande announced a nationwide sales promotion with 30% discounts on all real estate properties, part of the developer’s effort to boost sales and meet its target of cutting debt by half.