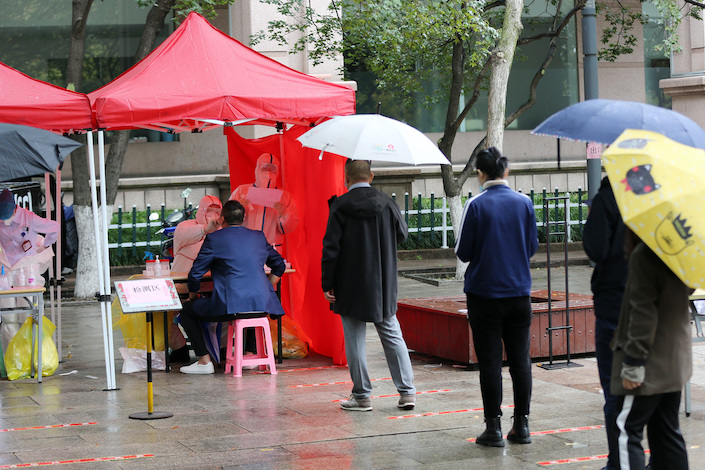 Qingdao is conducting mass coronavirus testing of all 9.4 million of its residents.

The source of the recent Covid-19 outbreak in China’s major northeastern port city of Qingdao may trace to two dock workers who tested positive and were treated in the hospital where the cluster of infections appeared, according to people close to the matter.

The two dock workers tested positive in screening at the Dagang Branch of Qingdao Port International Co. Ltd. and were reported Sept. 24 as asymptomatic. They had handled imported frozen seafood, in some samples of which the Covid-19 virus was detected. But local health officials said later large-scale testing didn’t find new cases.

Qingdao became the site of China’s first domestic Covid-19 outbreak in several months. As of Tuesday evening, officials reported six confirmed cases and six asymptomatic cases. All of them were closely associated with the Qingdao Chest Hospital, which has been shut down since the outbreak.

The two workers received treatment at Qingdao Chest Hospital, which is designated for treating imported cases, and were later transferred to another hospital, several doctors at the hospital told Caixin.

The source of the outbreak hasn’t been officially disclosed, but a document circulating online indicated that the hospital didn’t sterilize its CT scan room thoroughly enough after treating Covid-19 patients. The hospital denied such assertions, and officials haven’t responded directly to the authenticity of the document.

The hospital has only one CT scan room, which was used for chest scanning on both Covid-19 patients and other patients, according to a health worker at the hospital. Several workers said the CT room was strictly sterilized after each use.

It’s difficult to determine the route of infection in the hospital, said Hu Bijie, one of the leading infectious diseases experts from Fudan-Zhongshan Hospital. Insufficient sterilization of CT equipment may be a risk factor, but it cannot be determined whether that was the transmission route, Hu said. In designated hospitals in Shanghai, Covid-19 patients and other patients usually use separate CT scan equipment.

Qingdao Chest Hospital, located in the center of the city, is designated for tuberculosis cases. In the past, it undertook the task of designated treatment site for public health emergencies such as SARS, avian flu and H1N1.

Some local residents told Caixin that the hospital is dated and has poor conditions. The Qingdao government has long planned renovation and expansion of the hospital.

The city started mass testing of all of its 9.4 million residents. More than 4 million people in Qingdao have been tested, and 1.95 million test results showed no new confirmed infections, health officials said Tuesday in a news briefing.

Mass testing is an important technical means to understand the scale of the epidemic, said Wu Zunyou, chief epidemiologist at the Chinese Center for Disease Control and Prevention. The testing results so far suggest that the outbreak in Qingdao shouldn’t be large, he said.