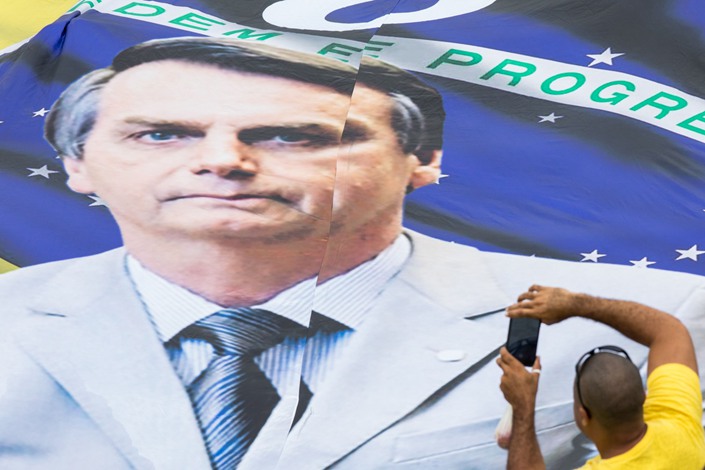 A supporter in Brazil uses a mobile device to take a photograph of a banner during the 38th presidential inauguration of Jair Bolsonaro. Photo: Bloomberg

(Bloomberg) — President Jair Bolsonaro is considering banning Huawei Technologies Co. Ltd. from supplying components to Brazil’s upcoming 5G network because he sees China as a global threat to data privacy and sovereignty, according to a senior member of his cabinet.

While a decision hasn’t been made yet and will take into consideration the views of others in the cabinet, the remarks are evidence of Bolsonaro’s continued suspicion of Brazil’s largest trading partner.

Caught between Washington and Beijing, Brazilian officials have so far refrained from saying whether they would give in to U.S. requests to keep Huawei out of the country’s ultra-fast mobile network.

Still, the cabinet member dismissed the possibility of Chinese retaliation, saying Beijing relies on Brazilian agricultural imports to feed its population. The perception in Brazil is that other countries that have banned Huawei have not suffered major consequences, the person added, requesting anonymity to discuss internal matters.

In a recent interview, China’s Ambassador to Brazil Yang Wanming said the decision on Huawei will help define the broader relationship between the two emerging market giants. “What’s at stake is whether a country can set up market rules based on openness, impartiality and nondiscrimination for all companies,” he said.

Asked to comment on the story, Bolsonaro’s office deferred the request to the communication ministry, which said in a statement the 5G decision is a matter of national security involving many stake holders, including the ministries of economy and foreign affairs. Leaders of all countries involved are discussing the subject, the statement read, without elaborating.

China was the destination of 40% of Brazilian exports in the first half of the year, according to data from the agriculture ministry. Sales to the Asian country, mostly soybeans, generated more revenue than those to the U.S., Latin America, Europe, Africa and the Middle East combined.

Yet relations with Beijing have been tense since Bolsonaro took office in 2019, after heavily criticizing China during the campaign trail. A close ally of Donald Trump, the Brazilian leader warmed up to President Xi Jinping during a trip to Asia last year. But just a few months ago Foreign Minister Ernesto Araujo implicitly censured China, writing in his personal blog that the coronavirus had revived “the communist nightmare.” The president’s own son, lower house lawmaker Eduardo Bolsonaro, has also blamed the pandemic on the “Chinese dictatorship.”

Other officials have expressed more pragmatic views on China. Vice President Hamilton Mourao and Science and Technology Minister Marcos Pontes have advocated for an open and fair bidding process to pick the builders of Brazil’s 5G network.

Brazil plans to select those companies around next May after the health crisis delayed the process initially scheduled for this year, Communications Minister Fabio Faria said in a recent interview. Faria said the delay is actually positive as it will allow the government to observe global developments before making a decision.