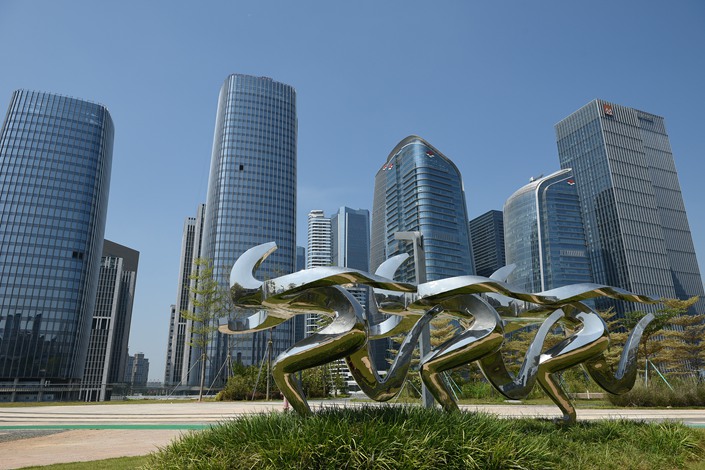 In an uncertain year, China has again place high hopes on Shenzhen. Commemorating the 40th anniversary of the establishment of the southern city’s special economic zone (SEZ), President Xi Jinping demanded that Shenzhen plan and promote further reform and take the lead in key areas.

Earlier, the State Council, China’s cabinet, had issued an implementation plan for the comprehensive reform in Shenzhen through 2025. The plan, which covers eight aspects of reform, comprises 27 separate measures and an initial set of 40 authorized items, giving Shenzhen more autonomy to conduct reform in important areas. This is clearly an important first effort, given that we have entered the “deep waters” of reform and both the internal and external environments remain complex and severe. As a pioneer, Shenzhen must have new responsibilities and actions.

The task list for the first test has been issued, focusing on the improvement of the market-oriented systems and mechanisms for allocating productive factors; the integration and development of innovation and industry chains; the market-oriented international business environment based on rule of law; the high-level open economic model; the supply system for public services; and environmental and urban space governance systems.

However, Shenzhen has not yet tested in practice which areas are ripe for new breakthroughs. The plan, which will begin this year, requires the city to make important progress by 2022 in all aspects of systems building and create a suite of major systemic achievements that can be replicated and promoted nationwide. By 2025, Shenzhen will have achieved landmark results in the reform of important areas and key links, and will have basically completed the pilot reform tasks.

The public is full of expectations, but they are also anxious about Shenzhen. Many reforms are required, and many are “hard bones.” Unlike the existing free trade zones and free trade ports, the central government has not directly imposed the system, but has freed Shenzhen to explore further reforms. Can this pioneering city repeat the trick? Its best response is to uphold its vanguard spirit and achieve convincing results.

The central government has given Shenzhen unprecedented authority, but whether Shenzhen can handle it will undoubtedly test the wisdom and determination of local decision-makers, as well as the administrative powers of the upper and lower levels of government.

To be fair, many of Shenzhen’s current difficulties are not local, but overall problems that China faces as it moves into the deep waters of reform and opening up. If those issues were easy to solve, we would already have done so. Therefore, it makes sense for Shenzhen to try first.

Shenzhen’s importance to Chinese people today is far greater than when it first became an SEZ. But if it fails to make breakthroughs in the upcoming trials, it may fade in significance. Competition between China’s localities is becoming increasingly fierce. Now that Beijing has granted Shenzhen special new power, other places will naturally seek equal treatment. Objectively speaking, this is the mechanism by which China replicates and develops reforms. But it carries the precondition that Shenzhen first meets expectations.

Today’s Shenzhen has a more robust institutional framework and stronger material foundations. In the past 40 years, its GDP has grown by a factor of nearly 10,000, and its population now exceeds 10 million. It has established a relatively complete market economic system, and innovative industries have clustered in the city, attracting a large number of talented workers. As its model has spread to other parts of China, Shenzhen has become the confident symbol of a national economy dominated by the South.

The city’s initial trials do not necessarily need to fully blossom. The plan aims to proceed from deeply embedded issues that resonate with people and make breakthroughs in key areas. It clearly encourages Shenzhen to deepen exploration of its land management system. Although some may feel disappointed that Shenzhen, which has long suffered from scarce land resources, has not been permitted to expand, we might interpret this as the central government challenging the super-large city to explore new ways of developing efficiently under land constraints.

People in Shenzhen have long complained about the city’s insufficient public resources, including medical care and education, but we should note that the government has always allocated such resources according to the number of registered residents. Shenzhen is a young city with far more migrants than permanent residents. As a result, it urgently needs to break the old rules and achieve full coverage of public services.

One of the keys to Shenzhen’s success has been its ability to attract high-skilled workers, a phenomenon that will also play an important role in determining the city’s future. For this reason, Shenzhen must build on its leading role in household registration reform.

In the most cutting-edge areas of economics and finance, the plan spends a lot of time outlining support for the development of internal closed pilot tests of the digital yuan and the cultivation of the data markets. Shenzhen’s exploration of these sectors will go on to lead the country.

The plan returns many times to mentioning the market, the rule of law and innovation. In his speech, Xi affirmed that Shenzhen “takes the lead in carrying out market-oriented reforms of the economic system,” a source of gratification for many entrepreneurs.

Shenzhen has accumulated rich experience in the construction of a service-oriented government built around the rule of law, with obvious achievements. However, away from the demands of its high-level market economy, the city still has to take new steps in the reform of “delegation, regulation and service.” Rule of law and democracy are key to modernizing governance, and Shenzhen has a responsibility to continuously raise the standard of solving governance problems through rule of law.

In line with the transformation of the main contradictions in Chinese society, the citizens of Shenzhen, an international metropolis, are bound to have higher demands for realizing better lives. In the past, we helped improve their sense of identity by stimulating the economy and growing their wealth, for instance by supporting a few more leading companies and building a few more industrial parks.

In the future, we must make them happier via the overall improvement of social governance. People attach great importance to technological and commercial innovation, but social governance innovation is equally important. The key is to establish a system jointly built, governed and shared by the government, the market, and society. To this end, we should consider encouraging nongovernmental organizations to join in with governance in accordance with the law.

Shenzhen today is the result of the hard work of several generations, and its tomorrow will require similarly hard-earned progress and breakthroughs. The city is known for thinking flexibly to enact pioneering reforms that, in turn, lead to further changes.

Twenty-eight years ago, former Chinese President Deng Xiaoping said during his famous “Southern Tour” that Shenzhen’s most important experience was to dare to forge ahead and take risks, without which the city would never have struck the “right path.” Only by fostering its world-leading spirit, energy and style can the city now create new and even greater achievements.

The Chinese version of this article was published in Caixin Weekly on Oct. 19, 2020, and is only available for Caixin Global’s app users. To unlock more bilingual articles, download the Caixin app.