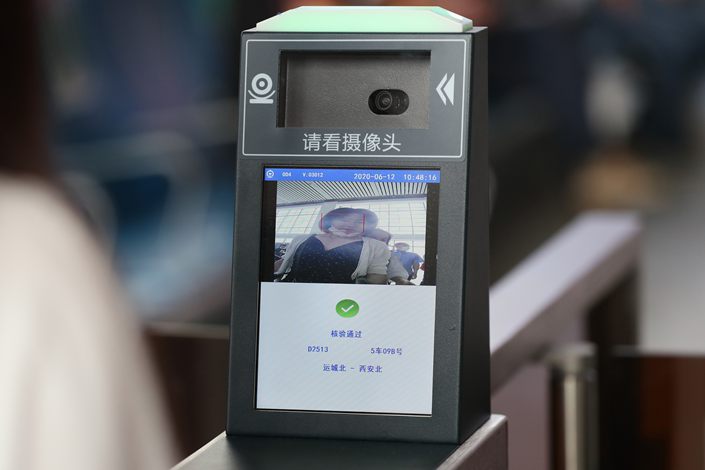 A passenger gets her face scanned on June 12 as she enters Yuncheng North Railway Station in North China’s Shanxi province.

Chinese lawmakers have criticized parts of a draft data protection law touching on the use of facial recognition as too vague and open to abuse, opening a window onto the heated debate surrounding the spread of surveillance technologies.

Several legislators said they believe the proposed Personal Information Protection Law fails to clarify rules governing the public use of facial recognition software, the roles of government authorities and who should be held legally accountable for data leaks.

The discussion comes at a time of high concern in China about the rapidly expanding use of facial recognition, which is frequently installed in public places without the people it affects being consulted.

A survey last year by a Beijing-based research institute found large majorities of respondents worried that the technology increased the risks of their facial data being leaked or digitally altered to resemble someone else, a practice known as “deepfaking.”

The draft law was deliberated on last week by China’s highest legislative body, the Standing Committee of the National People’s Congress (NPC), as part of a raft of proposed tweaks to the Asian nation’s legal system. The text has not yet been released for public consultation, but will likely build on a previous draft (link in Chinese) from 2017.

Although the legislation would enshrine the principle of informed consent, it does not specify the rules for collecting and processing facial data, saying only that legal entities would be required to gather only as much as they need to complete their stated tasks.

The draft would also not necessarily require those who install image collection and personal identification equipment in public areas to gain the individuals’ consent before gathering their facial data, as long as they could show their actions were “necessary to uphold public safety.”

“Facial recognition is currently required in too many scenarios, and everyone feels uncomfortable,” she said. “But it also has many convenient uses, such as locating missing children.”

Committee member Wang Chaoying said the proposals needed to better balance data protection with public security. “We need to look into a law that minimizes the amount of data collected,” he said, “and states the circumstances in which data will be gathered, how it will be saved and kept, and who is legally responsible if it gets leaked.”

His colleague Lü Wei criticized the draft for not stating whether the authorities would need to approve the public installation of image-collecting equipment and demanded more clarity on “what kinds of procedures are necessary and who will do the authorizing.”

In the same vein, committee member Chen Sixi said the draft needed to “clearly distinguish and categorize” the relationships between entities that collect, store, and process facial data.

One expert interviewed by Caixin, who requested anonymity due to the sensitivity of the matter, said they worried that emerging smart algorithms could combine individual facial data with other personal information to track people’s movements and behavior, or discriminate against them based on ethnicity or illness.

“It puts a psychological burden on the subject being filmed — a fear of the unknown,” the expert said.

Other committee members recommended the government seek to heighten barriers to the arbitrary collection and use of biometric data and keep a closer watch over emerging technologies and applications like deepfakes and web crawlers, which use algorithms to scour the internet for information related to certain queries.

Facial recognition technologies identify individuals by capturing visual information about their facial features and comparing it with similar information stored in a database.

Such technologies are used widely in China, for instance when verifying the identities of people when they use cross-country transport services, check into hotels, or sign up for instant messaging services like WeChat — practices required under the country’s counterterrorism and cybersecurity laws.

Although some people praise facial recognition’s perceived security and convenience, others have expressed unease at its growing use in public places, including residential compounds, schools, hospitals, subway stations and supermarkets.