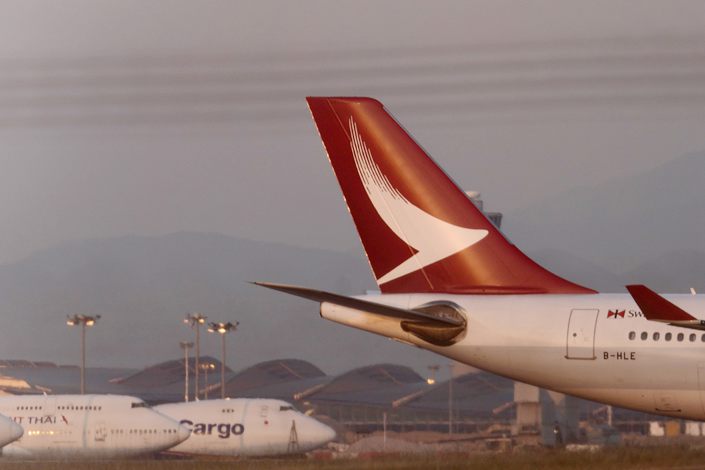 The tail fin of an Airbus SE A330-342 aircraft operated by Cathay Dragon, a unit of Cathay Pacific Airways Ltd., right, is seen at Hong Kong International Airport at dusk in Hong Kong, China, on Saturday, March 11, 2018. Photo: Bloomberg

(Bloomberg) — Cathay Pacific Airways Ltd. will cut about 5,300 jobs based in Hong Kong and and close its Cathay Dragon unit as part of a sweeping overhaul of the city’s flag carrier triggered by the halt in air travel due to the coronavirus pandemic.

Another 600 Cathay workers outside of Hong Kong may also be affected, and 2,600 currently unfilled positions will be eliminated. The entire reduction of some 8,500 positions amounts to around 24% of Cathay’s headcount, one of the largest hits in the aviation sector globally since the outbreak started.

“The future remains highly uncertain and it is clear that recovery is slow,” Cathay said in Wednesday’s statement. “The management team has concluded that the most optimistic scenario it can responsibly adopt is one in which, for the year 2021, the company will be operating at well under 50% of the passenger capacity it operated in 2019.”

Covid-19 has had a devastating impact on aviation. As many as 46 million jobs are at risk, and airlines alone face about $420 billion in lost revenue this year. Carriers with no domestic market to fall back on, like Cathay and Singapore Airlines Ltd., have been hit especially hard as international travel has ground to a halt. Cathay’s job cuts are among the most severe in the industry, outnumbered by only a handful of others such as Germany’s Lufthansa and the two big U.S. carriers, American Airlines Group Inc. and Delta Air Lines Inc.

Shares in Cathay, which have tumbled 41% this year, jumped as much as 6.6% on Wednesday morning. The South China Morning Post reported late Tuesday that Cathay would eliminate 6,000 positions.

Cathay’s restructuring is aimed at reducing its monthly cash burn to about HK$500 million ($65 million) from the current HK$1.5 billion to HK$2 billion, the carrier said in Wednesday’s statement. The plan has been approved by the airline’s board and will cost about HK$2.2 billion.

The airline had about $949 million in cash and cash equivalents as of June 30, Bloomberg-compiled data show. Assuming the run rate can be reduced to the stated goal, that gives Cathay around 15 months before it’s running on empty.

The Hong Kong-based airline also said Dragon’s operations will cease from Wednesday; regulatory approval will be sought for the majority of its routes to be operated by Cathay and Hong Kong Express Airways Ltd.

Closing down Dragon is reasonable given Cathay is facing problems in the mainland market, Luya You, a transportation analyst with Bocom International Holdings Co. in Hong Kong, said on Bloomberg Television.

Dragon operated mainly narrow-body aircraft such as Airbus SE A320s and A321s to destinations across Asia and more than 20 mainland Chinese cities, including the lucrative Beijing and Shanghai routes. The carrier had a fleet of 48 aircraft as of June 30 and firm orders for 16 Airbus A321neo jets, according to Cathay’s website.

Cathay is one of Hong Kong’s biggest employers. The company had already introduced an unpaid leave program for staff earlier in the year as monthly losses climbed to as much as HK$3 billion, and trimmed salaries and closed crew bases overseas. Chairman Patrick Healy said in August that those cost control measures wouldn’t be enough.

In June, Cathay flagged it had raised HK$39 billion through a recapitalization plan that gave the Hong Kong government a 6.08% stake and deferred delivery of aircraft to save funds.

Executive pay cuts will continue into 2021 and a third voluntary leave plan for ground staff will be introduced in the first half of next year, Cathay said. There will be no salary increases for 2021 and annual bonuses for this year. Cathay’s cabin and cockpit crew that are based in Hong Kong will be asked to agree to changes in their conditions of service that will match remuneration more closely to productivity and enhance market competitiveness.

“We have taken every possible action to avoid job losses up to this point,” Augustus Tang, chief executive officer of Cathay, said in a separate statement. “The global pandemic continues to have a devastating impact on aviation and the hard truth is we must fundamentally restructure the group to survive.”

Cathay expects to see a gradual recovery in capacity in the second half of 2021 after operating below a quarter of its capacity in the first half, should vaccines currently under development prove to be effective and are successfully available to the mass, the company said. It will monitor the situation and adopt measures to survive the pandemic, it said. The International Air Transport Association has said that travel won’t return to levels seen before the pandemic until 2024.

Cathay has “to become leaner and more efficient,” Brendan Sobie an analyst and consultant at Singapore-based Sobie Aviation, said. “The job cuts were inevitable.”

Sobie said that while Cathay has no domestic market to lean on, the airline has enough liquidity to weather the years-long recovery in international travel.

Equity analysts have started turning more bullish on Cathay, too. The company’s Hong Kong-listed stock has five buy recommendations, 8 holds and only 3 sells, data compiled by Bloomberg show. Although the shares are down since January, they’ve ticked up in recent months, rising 16% from a low hit this year in early August.

Cathay was struggling with losses before the pandemic as anti-government protests in Hong Kong led to a sharp reduction in traffic last year and a change in management. When Covid-19 happened, it put the airline into a survival mode by cutting capacity and offering voluntary no-pay leaves to staff to survive in a challenging environment.

The Hong Kong government on Wednesday requested Cathay Pacific take full account of its potential impact on the city’s status as an international aviation hub.

“The business restructuring plan is a commercial decision by the Cathay group,” Financial Secretary Paul Chan said. “Though without the right to vote, the two observers appointed by me to the board have expressed opinions on its plan and reminded the group’s management of the need to keep the impact caused to its employees and the society to the minimum.”