Millions Fly With China’s Airlines as Pandemic Drags Down Competitors 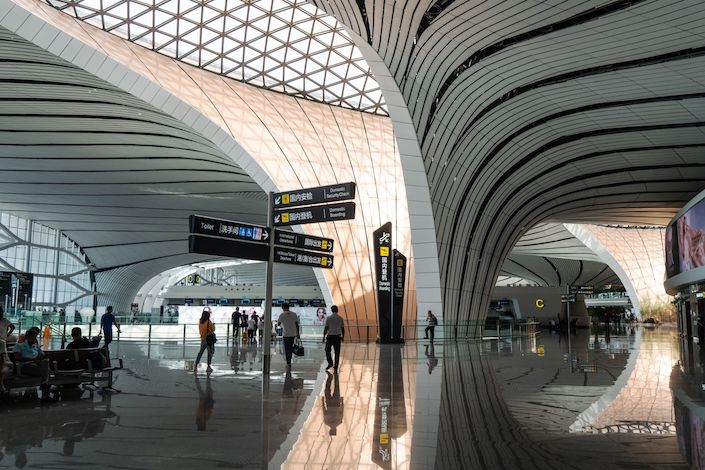 (Bloomberg) — The world’s harried airline bosses will look enviously to China this week as millions of people take to the skies for national holidays, helping Chinese carriers push even further ahead in their recovery from the pandemic.

The holiday starts with the Mid-Autumn Festival and National Day Thursday and runs to Oct. 8. The so-called Golden Week is typically a time for families to reunite and will add momentum to a domestic rebound that’s lifting air travel within China back toward normal levels. More than 15 million people are due to fly over the period, a 10% increase from last year, according to Lan Xiang, head of the research division at online travel agent Qunar.

Airlines elsewhere are mired in crisis as they struggle to rebuild networks and coax virus-wary passengers back on board. Demand and scheduled capacity in the U.S. collapsed with the spread of Covid-19, while people in Europe are loath to travel in case they get caught out by fast-changing border and quarantine restrictions. Even with international routes largely off limits, Chinese carriers are in a better position thanks to their vast home market and the nation’s success in bringing the virus under control.

China’s airlines haven’t evaded the crisis altogether. The three biggest posted combined losses of almost $4 billion in the first half, and the recovery won’t be enough to put them into the black by year-end. Their worst month was February, shortly after the outbreak began in Wuhan on the cusp of Chinese New Year. But just two months later, they were already sounding confident about overcoming the slump and luring passengers back with deals.

People now feel “very safe” flying within China, and demand has picked up strongly, Trip.com Group Ltd. Chief Executive Officer Jane Sun said Sept. 24 during an online aviation summit. Even business travel will rebound, she said, dismissing concerns that work trips are a thing of the past now that people have become more accustomed to virtual meetings.

The busiest day in the coming holiday will be Oct. 7, when more than 13,800 domestic flights are scheduled, according to aviation data analytics company Cirium. The figure represents an increase of almost 10% from Oct. 6, 2019, the busiest day of last year’s Golden Week, Cirium said. Travel as a whole in China is still expected to be more subdued than last year, with a total of 550 million domestic tourists compared with 782 million a year ago, which included more international flights, state media reported.

Shanghai is the most popular destination followed by Beijing, Cirium said, noting that the volume of domestic fights over the holiday “looks set to push well past last year’s record.” Trip.com’s Sun said sought-after destinations include Sanya in the island province Hainan, off the southern coast. The large group tours that have long been a common sight in China have given way to a preference for smaller ones, she said.

The contrast with the U.S. could become even more striking as the government’s Payroll Support Program is to expire Oct. 1 and could result in tens of thousands of job losses unless Congress approves an extension. Warren Buffett’s Berkshire Hathaway Inc. exited its stakes in the four major U.S. airlines earlier this year, and the outlook for their shares remains gloomy.

During the worst of China’s slowdown, when the virus was raging and its aviation market shrank to the size of Portugal’s, there was talk of bailouts and possible mergers of smaller carriers with state-owned giants. Measures included subsidizing airlines’ international flights, but nothing came close to the scale of support elsewhere, such as the HK$39 billion ($5 billion) recapitalization plan for Hong Kong-based Cathay Pacific Airways Ltd., in which Air China has a stake of about 30%.

China is pressing on with major aviation infrastructure developments. In July, construction finished on the starfish-shaped Qingdao Jiaodong International Airport, which will be able to handle 35 million passengers a year and operate landings or takeoffs every 73 seconds, according to state media. Just over a year ago, the giant 80 billion yuan ($11.7 billion) Daxing International Airport opened in Beijing, while a hub in Xi’an is undergoing a 48 billion yuan expansion. The government also wants to better develop China’s air cargo industry.

There will be a squeeze for airlines in China as competition intensifies, with aggressive fare discounts weighing on passenger yields. Bloomberg Intelligence said Air China’s losses will be exacerbated by troubles at its associates and could reach 15 billion yuan this year, even with the pickup in domestic travel. China Eastern’s 2020 revenue could slide 50% to 65 billion yuan, while China Southern’s sales may drop 41%, analysts James Teo and Chris Muckensturm wrote.

The three major Chinese airlines flew about 26 million passengers in August compared with nearly 37 million in the same month of 2019. In February, they flew only 4.6 million passengers. The pandemic in China has eased dramatically since then, with no new local cases reported for more than a month and economic indicators such as retail sales back to pre-virus levels.

The international air travel picture remains bleak, which is particularly tough on the likes of Cathay and Singapore Airlines Ltd. because they can’t rely on a home market as their mainland peers. The Association of Asia Pacific Airlines said carriers in the region flew only 1 million passengers internationally in August, 3% of a year earlier.

Cheaper fuel costs and strength in the yuan have further bolstered Chinese airlines ahead of the holiday windfall. Prospects of a boost in demand for U.S. carriers over Thanksgiving, meanwhile, don’t appear to be strong. OAG Aviation Worldwide said forward bookings for November are at just 25% of last year’s levels for American Airlines Inc. and United Airlines Inc., while for Delta Air Lines Inc. they’re languishing at 12%.