By Liu Yanfei and Anniek Bao 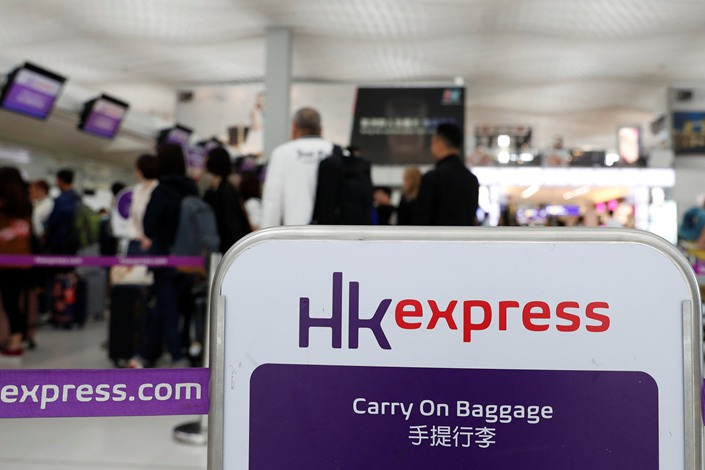 Hong Kong Express Airways is offering three 90-minute sightseeing flights in November, called “UOFlycations,” which the budget airline is billing as a chance to “rediscover the joy of travelling.”

The coronavirus pandemic has done some strange things to the global aviation industry, with some passenger jets retrofitted to carry cargo, while others have been grounded by the thousands.

But some airlines are taking a more novel approach, offering what have been dubbed “flights to nowhere.”

Cathay Pacific Airways Ltd.’s budget carrier is the latest to sign on to the sightseeing concept with scenic flights around Hong Kong in an effort to bolster pandemic battered sales.

The “UOFlycation” trips were booked out within hours of launch on Friday afternoon, with the three flights arranged in November being priced at HK$388 ($50) per ticket.

The Hong Kong airline and tourism industries have been severely affected during the pandemic, as border closures and mandatory quarantine measures stopped people from travelling and put international flights on hold for months.

With its aircraft grounded for almost five months, HK Express resumed operations in August. It posted a net loss of HK$779 million in the first half, while its parent company Cathay Pacific Group recorded HK$9.87 billion in losses, with three quarters of the red ink attributed to Cathay Pacific Airways and Cathay Dragon, its two major subsidiaries and leading carriers in Asia.

It offered 3-hour flights departing from Taipei Taoyuan Airport, then traversing the neighboring skies before landing at the same airport. Japan’s All Nippon Airways later announced similar plans for Hawaiian-themed flights over the city of Tokyo.

The no-destination flights have not been trouble free, however, for airlines which have encountered headwinds from environmental critics.

Singapore Airlines cancelled its proposed three-hour flights, departing and landing at Singapore Changi Airport, in response to a fierce backlash from local green activists. The Singapore-based SG Climate Rally (SGCR) led the opposition, criticizing the flight concept’s “carbon-intensive travel for no good reason,” it said in a statement.

These environmental concerns are generally being overshadowed by the need to shake off the debilitating economic fallout of Covid-19 on the airline industry.

The IATA estimated the global airline sector will experience a loss of $77 billion in the second quarter and predicted it will not return to profit until 2022.

It seems unlikely the round-trip initiative will have any significant turn-around effects on the crippled airline sector, but one silver lining is that some crew members and technical staff can return to work, people in the industry told Caixin.

HK Express passengers are required to practice social distancing and wear face masks while onboard, but there will be no quarantine, medical check or coronavirus testing when the journey concludes, according to its website.

Hong Kong has reported 22 days with less than 20 daily new cases, according to data from the Hong Kong Department of Health, which advised residents against unnecessary plans to go out on Sunday when it reported 7 new local cases.

The local health authority would not comment on the safety of the HK Express program and directed Caixin to an FAQ section provided by the airline.