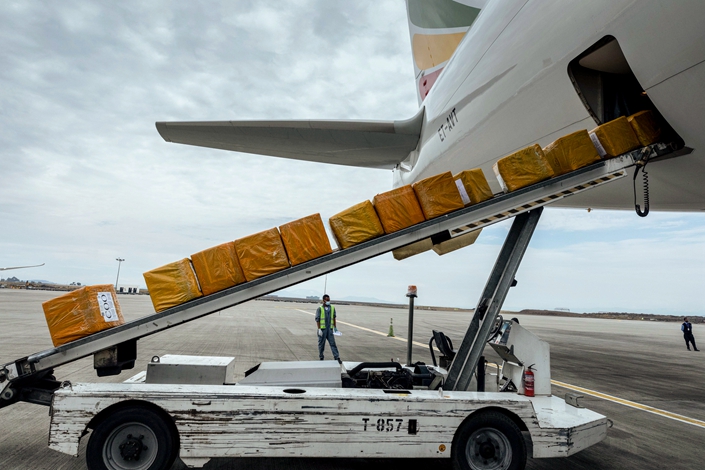 Airlines are converting their passenger jets into cargo planes to keep business afloat after the Covid-19 pandemic brought heavy restrictions on air travel and depressed the travel market.

At least 10 Chinese and international airlines have managed to retrofit their planes to haul goods instead of people. China Eastern Airlines, one of China’s four major carriers, increased its freight capacity last month by modifying the internal structure of some of its planes, which will carry electronics and Tesla automotive parts when flying back to China from other countries this month, an employee told Caixin.

Commercial flights had carried about half of the world’s air freight cargo before the coronavirus struck, but related groundings and travel bans have squeezed the market, driving up freight costs even as the downturn left many airlines close to bankruptcy.

China’s Civil Aviation Administration excluded passenger planes hauling goods from the limit it imposed last month on flight numbers in and out of the country, in order to compensate for a resulting sharp drop in air-freight capacity.

An employee at German logistics company Kuehne & Nagel International AG told Caixin that the workaround could help offset the reduction in capacity and pull soaring freight prices down. Chinese demand for imported fresh food, high-tech parts, medicine and other goods is recovering now that the virus has been largely brought under control in the country.

Delta Air Lines Inc. has also resumed some flights between China and the U.S. with converted passenger planes shipping goods. The first batch of converted planes is flying between Detroit and Shanghai, carrying electronics like laptops to China, one airline executive told Caixin.

But passenger planes cannot fully replace cargo planes. Passenger jets do not have the purpose-built conveyor belts of cargo planes, leaving goods to be unloaded by hand, which can take many hours and create delays, the executive said.

Passenger planes are also designed to haul a much lower volume than their cargo equivalents. A Boeing 737 passenger plane can carry some 20 to 30 tons of goods, and can increase that to 70 tons after being refitted. But a Boeing 747 cargo plane alone can carry some 110 tons in one flight. “It’s very costly to refit a plane, so some companies may refit smaller, older aircraft to save money, which means there will not be a huge improvement in freight capacity,” said Huang Wenhui, an air freight director at transport service provider CH Robinson Worldwide.