Tycoon Who Helped Evergrande Has Debt Problems of His Own 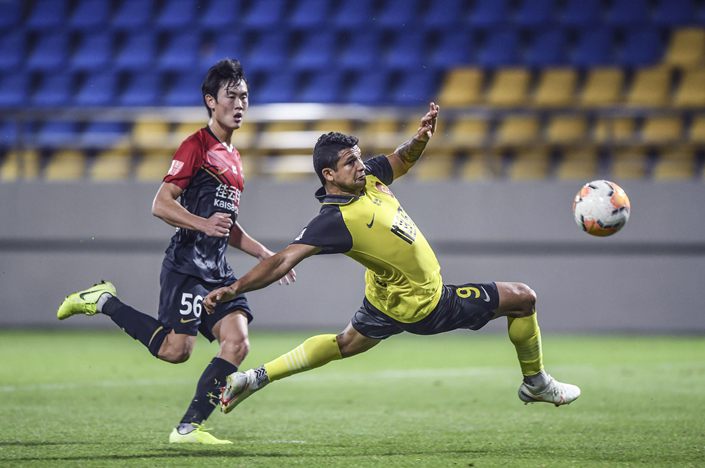 When he forged a deal last month to avert a cash crush, Hui relied on another friend: one who made his fortune selling washing machines and air conditioners and shares his passion for soccer.

Zhang Jindong, founder of Suning Appliance Group Co. Ltd., stood next to Hui at the signing ceremony celebrating the Evergrande agreement. Among the three dozen strategic investors involved, Zhang was the largest corporate supporter to waive his right to force a repayment by January from the developer.

With a $120 billion debt pile, Evergrande is the world’s most-indebted developer. In the week leading up to the deal, the firm’s shares dropped 16% and its yuan note due 2023 tanked to a record low. Both assets have since rebounded.

“The supplementary agreement is very critical for Evergrande’s long-term development,” said Maggie Hu, an assistant professor at the business school of the Chinese University of Hong Kong. She said it’s reasonable Suning acted to give a lifeline to Evergrande during the crisis, explaining “their commercial interests are closely linked.”

While the two have done business together for a long time, doubts over their relationship briefly emerged when Suning said before last month’s agreement it was planning to demand the return of its investment should an Evergrande unit fail to list on a domestic exchange by January. The news also raised questions over Suning’s financial health after the coronavirus pandemic hit retailers particularly hard. Zhang’s flagship Suning.Com Co. Ltd. reported a 13% drop in revenue and a loss of 166.6 million yuan ($25 million) in the first half of 2020, compared with a 2.14 billion yuan profit for the same period a year earlier.

The stock was little changed on Friday, while some of its bonds sank to a record earlier this week.

“The risk factors include competition in the retail industry that is getting intense,” Shi Kun, an analyst at China Securities, wrote in an Oct. 15 report. “Chinese residents’ spending willingness is likely to drop, and the influence of the pandemic might be bigger than expected.”

Even before Covid-19, Zhang’s empire was showing signs of strain: Debt at his Suning Real Estate Group Co. Ltd. soared by 47% last year as sales fell by one-third. By April, one of his units had pledged its entire stake in a financial arm valued at 56 billion yuan to four institutions for funds, AIC records show.

The hit to the 57-year-old tycoon’s fortune is clear: He has lost more than 30% of his wealth this year and is now worth $5.1 billion, according to the Bloomberg Billionaires Index.

Zhang grew up in China’s eastern city of Nanjing, lost his parents by his early teenage years and was brought up by his elder brother.

“It was very difficult when I was a child, and it urged me to liberate or change the destiny of poverty when I grew up, with persistent pursuit of my work,” Zhang said in a Chinese interview for a local paper in 2006.

Zhang’s academic prowess earned him entry to Nanjing Normal University and he graduated in 1984 with a degree in Chinese literature. He worked as a clerk at a state-owned company, earning 55.8 yuan a month. While more than the national average at the time, he realized on a business trip to Shanghai that it barely paid for a few cups of coffee.

So he opened his own cafe in Nanjing.

As he searched for cheap air conditioners for his coffee shop — temperatures can go above 40 degrees Celsius (104 Fahrenheit) in the summer — he struck up a friendship with a distributor and later a partnership. In 1990, Zhang quit his job at the state-owned company and began selling AC units with the proceeds from his cafe. Suning was born.

The deals highlight the importance of China’s “guanxi” — social networks of influence among business titans. Zhang is also close to the nation’s richest man, Jack Ma, and Dalian Wanda Group Co. Ltd.’s Wang Jianlin, to whom he offered a lifeline when he was nearing a cash crunch two years ago.

In 2015, Alibaba Group Holding Ltd. invested $4.6 billion for a 20% stake in Suning, which in turn put more than $2 billion in the e-commerce giant, a stake later sold for a 14 billion yuan profit that Zhang used to expand. In 2018, Suning bought 14% of Wanda Commercial Properties for $5.4 billion with a consortium, helping Wang raise cash, and later purchased 37 Wanda department stores as the company was looking to pare debt.

“The competition in the retailing industry is very fierce, and a company has to strategically ally with partners and compete in multiple fronts to survive,” said the assistant professor Hu.

But Suning’s expansion came at a cost, and the pandemic is forcing the company to reevaluate its plans. As the firm is about to celebrate its 30th anniversary, Zhang said it will spend the next decade focusing on services to stand out from competitors. The retailer will aim to enhance its supply-chain, logistics and finance capabilities, connecting with more small- and midsize retailers, according to an article on the company’s website.

“We rode over different economic circles over the past three decades, and Suning is still developing,” Zhang said in the Suning article. “Retail is a marathon without a finish line.”