By Kang Jia and Denise Jia 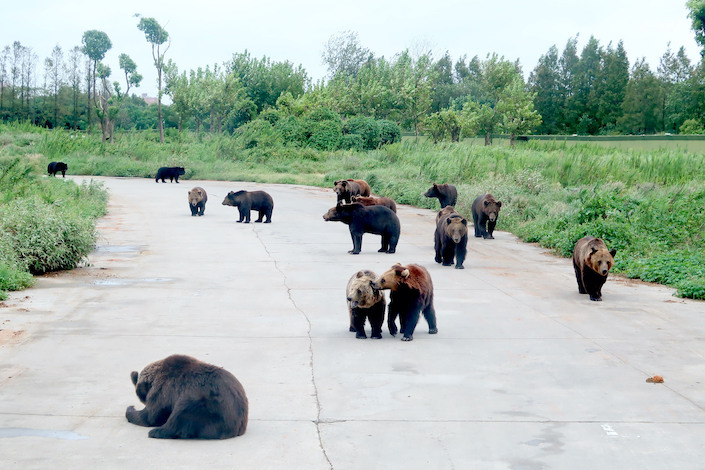 From the balcony where wild animal keeper Zhang Jinbin lived, he could see the white and red striped circus rooftop and the Ferris wheel of the Shanghai Wild Animal Park where he worked less than a mile away.

His grandfather would wait on the balcony every afternoon at 6 o’clock to see his car driving the short distance home. But on the evening of Oct. 17, the grandfather didn’t see the car. Worried, Zhang’s mother, Zhang Xiuhong, rushed to the park entrance.

There she saw police cars rolling in and out. Around 9 p.m., zoo managers told her the bad news. Her son was dead, but they didn’t say what happened. She later learned that he was attacked and killed by bears as park visitors on a tour bus watched in a harrowing and controversial incident in an area where predatory animals roam freely.

In a statement posted Oct. 18, the park said a staff member was attacked by bears while working in the beasts-of-prey zone, resulting in the death of the employee. The park has since temporarily closed the area, refunded tickets for visitors and “strengthened its safety operations,” the park said.

“I don’t understand,” Zhang’s mother said. “He’s a tiger keeper. Why would he work in the bear area? He knew people are not allowed to step outside vehicles in the beasts-of-prey zone. Why would he get outside his vehicle?”

Videos shot by tourists and text descriptions of the incident went viral on social media. The mother also obtained surveillance video showing her son’s brief interaction outside his vehicle with the operator of an excavator that was working in the wild-animal zone as well as the bear attack as he was rushing back to his auto. For either worker to exit a vehicle in the area was strictly forbidden.

Zhang, 26, studied as tour guide in a technical secondary school. After graduation, he joined the Shanghai Wild Animal Park as a tour guide. The park, the first and largest national-grade wildlife park in China, spans almost 400 acres in the east of the city center and is home to an estimated 10,000 exotic animals, including zebras, flamingos, giant pandas and tigers.

The park has two areas where animals range outside cages that that visitors can tour while remaining inside designated vehicles: a herbivore animal zone and the beasts-of-prey zone. The park offers two kinds of tour vehicles. One is a school bus-like tour bus. The other is a cage-like vehicle painted with tiger stripes from which tourists can feed the wild animals outside.

Zhang was a tour guide on the buses before he became a tiger keeper late last year. He loved wild animals, which is why he applied for the job, his mother said. As part of his daily routine, he let the tigers out of their dens, cleaned the dens and prepared their food. After the end of visitor tours each day, he and colleagues would use vehicles painted with zebra stripes to drive the tigers back to their dens.

He liked to talk about his work at the park at dinnertime, and he knew each tiger’s name, his mother said.

On Oct. 17, an excavator was removing plants in the bear area. The excavator and driver were dispatched by Shanghai Petrochemical Jinyi Industry Construction Co. Ltd., according to a sporadic project order from the park. Caixin’s calls to the company went unanswered. The driver couldn’t be reached.

When maintenance work is going on in the beasts-of-prey zone, animal keepers like Zhang are required to monitor the site because they know the animals and the areas in case of emergency, Liu Wenshan, a zoo maintenance worker, told Caixin. Usually maintenance work is done in the beasts-of-prey zone after the animals are driven back to their dens. But as the park has a large number of bears, it’s harder to drive them all back to their dens, and they don’t usually return home each night, Liu said.

A screenshot of someone’s WeChat account shows visitors inside a tour bus watching as a park worker is dragged away by several bears while a worker in the excavator tries and fails to disperse the bears. The screenshot shows some of the park worker’s clothes and shoes on the ground. Video purportedly of the incident shows tourists yelling as they sit inside a bus while several bears are gathered outside, crowded in one spot.

A tourist told Caixin that when the bus went through the bear area that day as the excavator was operating, the tour guide tried to attract a bear with food. But the bear didn’t move, perhaps frightened by the machine, the guide told the tour group.

When Zhang turns back to return to his vehicle, a bear suddenly appears less than 5 meters away from him. He apparently sees the bear and quickens his pace. But it was too late. From the time Zhang left his vehicle to the bear attack, less than a minute elapsed, Zhang’s mother said.

The excavator driver left his vehicle to check the machine because it wouldn’t move due to a malfunction, according to Li Qingsong, who is in charge of vehicle maintenance at the park. After the bear attack, the driver tried to maneuver the excavator bucket to disperse the bears but was unsuccessful. After the first bear attacked Zhang, a group of bears gathered and dragged him from the road to a water area.

“Even if you have a tranquilizer gun or water cannon, it’s too late,” Li said.

The tiger area is next to the bear area. In response to Zhang’s mother’s question of why a tiger keeper would be in the bear area, the park said animal keepers are responsible for cruising and monitoring the whole beasts-of-prey zone and are not limited where the animals they feed stay, Zhang’s mother said.

Zhang once told his mother bears are powerful and fierce, she said.

“A tiger may not even beat a bear,” Zhang said. If he came across bears, he should run, his mother said she told him. “He told me, it’s wrong to try to run, because a wild beast would surely come at you. You should keep calm and don’t panic,” the mother said.

Usually park workers keep a 2-meter metal pole with them when they have to exit a vehicle in the beasts-of-prey zone, Li said. Bears are frightened by the poles and would run away. If Zhang had carried the stick, he might have had a chance, Li said,

Bears have poor vision and hearing but an acute sense of smell, so bear pepper spray is usually a more effective defense in such an emergency, said Chen Liang, a former bear keeper at another zoo. Employees at the Shanghai park said they are never equipped with bear pepper spray.

When plants grow too tall and block tourists’ view in the cheetah, tiger and African lion areas, workers mow the plants, Liu said. An excavator would be used only in the bear area. Compared with park workers who frequently work in the beasts-of-prey zone, excavator operators work there only once in a while and have relatively less knowledge of the zone and are less vigilant, Liu said.

The separation of construction areas and wild animals is the most basic safety requirement in a beasts-of-prey zone, said Tian Xiuhua, director of the China Zoo Association and a professor of wildlife resources at Northeast Forestry University. In 2017, the Ministry of Housing and Urban-Rural Development issued rules on zoo design and management, specifically requiring all urban zoos and wild animal parks to follow the safety procedures, she said.

However, because wildlife parks and zoos differ in their number of animals, display methods and management scale, they basically establish their own regulations based on their situations, Tian said.

An animal keeper at a wildlife park in the inner Mongolia region told Caixin that no animals are allowed to spend the night outside their dens in his park, and it’s “absolutely impossible” for construction crews to work alongside the animals.