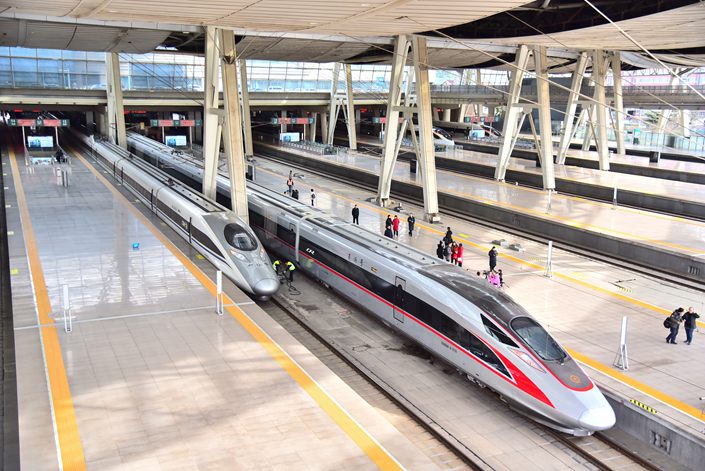 The Beijing-Shanghai high-speed rail line is one of China’s oldest, commencing operations in June 2011.

China’s lucrative high-speed rail line between Beijing and Shanghai will move from a fixed- to a flexible-price ticketing system at the end of this year, raising current prices nearly 10% in some cases, in a bid to boost profits by better reflecting demand during peak and slow periods.

The change will take effect from Dec. 23, and apply to trains traveling between 300 kph and 350 kph on the line, one the most lucrative in China’s state-of-the-art high-speed rail network, according to a Friday stock exchange filing (link in Chinese) from Beijing-Shanghai High-Speed Railway Co. Ltd. For example, second-class tickets between Beijing and Shanghai that now cost 553 yuan ($83) will sell for between 498 yuan and 598 yuan under the new system. Business class tickets that currently cost 1,748 yuan will float in a smaller range from 1,748 yuan to 1,998 yuan.

The flexible system should allow China State Railway Group Co. Ltd., operator of the nation’s high-speed rail system, to more closely mirror the prices of airplane tickets that also vary depending on the date and time, a transport analyst at a major brokerage told Caixin. He said that based on the Beijing-Shanghai line’s passenger volume and the company’s profitability targets, he would expect the prices to mostly go up.

The step is just the latest by the rail operator to squeeze more money out of its high-speed rail network, which is the world’s largest but has also left the company saddled with billions of dollars in debt.

China Railway has previously adjusted ticket prices on other lines in response to supply and demand. And at the end of last year, the operator’s units in Guangzhou, Shanghai and a number of other cities announced that they would adjust prices on some of their routes to account for differences in demand based on seasons, time of day and other factors.

“Pricing based on different market conditions is the right direction and cannot simply be understood as raising prices or lowering prices,” an analyst at a research institute on transport policy told Caixin.

The Beijing-Shanghai high-speed rail line is one of China’s oldest, commencing operations in June 2011. For all of that time it has basically operated on a single unified ticket price of 553 yuan for all but some of the fastest trains, which can cost slightly more. A move to more pricing at the top end of the range would represent a hike of about 8%.

On the same day that the publicly listed operator of the Beijing-Shanghai line made its announcement, China Railway announced the rollout of a number of ticketing products for frequent passengers, such as season tickets. It said high-speed trains running between 300 kph and 350 khp on the line connecting the cities of Chengdu and Chongqing in Southwest China would also adopt flexible ticket pricing.

China’s state planner first issued a document on price reform for the country’s high-speed rail system in 2015, clearly stating that rail operators could determine high-speed rail ticket prices themselves and could allow those prices to fall within a certain range based on market conditions.

The latest adjustments represent an extension of that policy, said Li Hongchang, a professor engaged in transport research at Beijing Jiaotong University. But he also pointed out that China’s rail system is still a monopoly controlled by China Railway, and that the oversight mechanism for determining ticket prices has room for further improvement.

The Beijing-Shanghai rail line made an IPO in Shanghai at the start of this year, in a move that is part of China Railway’s broader plan to pay down its debt by bringing in outside investors. Besides the Beijing-Shanghai line, the only other listed entities from China Railways’ vast network are a line popular with freight haulers connecting the Northeastern city of Daqing with Qinhuangdao port, and a highly traveled line connecting the southern cities of Guangzhou and Shenzhen.

In another effort to bring in more outside investment, China Railway said last month it had identified three additional lines to include in a national pilot program involving real estate investment trusts (REITs) for infrastructure projects. REITs date back as early as the 1950s in the U.S., and use a corporate or trust structure to raise money from outside investors that is then used for the ownership and management of real estate-based assets, with profits delivered as dividends to stakeholders.