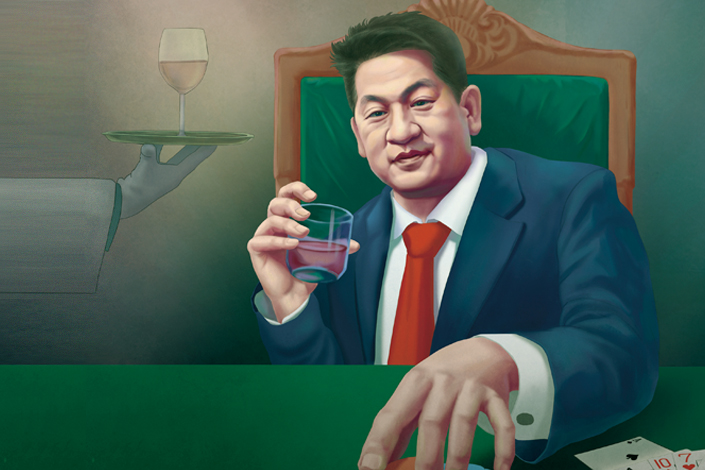 But a Caixin examination of court and public documents showed that She had a stained business track record in China and is listed by a court as a fugitive from illegal gambling charges.

His Yatai City is a massive commercial project located in a small town on the Moei River in Kayin State, bordering Thailand. Developed by Hong Kong-registered Yatai International since 2017, the project is planned to cover 12,000 hectares. Yatai City is billed as an industrial and entertainment complex that will accommodate a vast range of services including tourism, commerce, logistics, finance and technology development.

According to a report by Myanmar-based Karen Peace Support Network, a number of online and offline gambling facilities have been operated in Yatai City, sparking local residents’ concerns over money laundering and other crimes.

Public documents show that She is from the landlocked province of Hunan in south central China and later developed businesses in several Southeast Asian countries. He was little known by overseas Chinese communities in Southeast Asia until he appeared in Myanmar with the Yatai City project in 2017. She then became an active figure in Chinese business circles in Myanmar and Cambodia and was named the leader of several organizations of overseas Chinese businesspeople.

Several people with knowledge of Yatai City told Caixin that while the project is marketed as a smart industrial park, it is actually a hub of casinos that moved from the Philippines and Cambodia amid local crackdowns. There are several online gambling sites operating in Yatai City that target users from China, they said.

She declined Caixin’s request for comment. A person close to him said She wants to stay low-key amid recent disputes.

A new city for casinos

A Chinese developer who invested tens of millions of yuan to build offices and residential buildings in Yatai City since 2019 said there are “all kinds of” gambling services inside the industrial park.

A local worker at Yatai City also said there are many online gambling companies located in the city offering gambling-related online games.

Caixin found that between October and December 2017, Yatai City published a large number of recruitment ads on its Facebook page, looking for Chinese-speaking customer service staffers and offering generous pay. A person close to the matter said the hiring was mainly for gambling services.

In August 2019, the Cambodia government issued a policy banning online gambling, propelling a large number of gambling operators in the coastal city of Sihanoukville, many involving Chinese investments, to seek new shelters. Almost at the same time, Yatai City launched an intensive marketing campaign to lure businesses to settle in the park.

The Chinese developer said the location of Yatai City allows visitors to easily travel between Myanmar and Thailand and Cambodia. Meanwhile, the region doesn’t share a border with China, leaving the business out of the scrutiny of the Chinese government.

According to records in Myanmar, Yatai International registered its Myanmar operation in 2017 with $1.24 million. She Zhi Jiang, a Cambodian Chinese, was identified as the largest shareholder. Two other shareholders include a Malaysian citizen and a Myanmar military officer.

Caixin learned from separate sources that She Zhi Jiang is a former name of She Kailun.

Such practice violates Myanmar law. Although the Myanmar government allows overseas investors to operate casinos, the practice is banned in certain regions including where Yatai City is located.

The man with four names

Myanmar business registration records showed that Myanmar Yatai International is majority controlled by She Zhi Jiang, a China-born Cambodian citizen. But according to marketing documents of Yatai City, the boss of the project is She Kailun, identified as a Chinese Cambodian. Caixin found that the two names belong to the same person, who is also known as Tang Kailun or Tang Kriang Kai.

According to a 2018 report published by a journal backed by the China Federation of Overseas Chinese Entrepreneurs (CFOCE), one of the leading business organizations of overseas Chinese, She was born in the countryside of Hunan and moved to southern China’s Guangxi in 1996. After trying dozens of jobs, She made a fortune from developing online games and then went to Manila for new business opportunities.

There is little information about She’s business in the Philippines. But documents from a Chinese court shed light on shady dealings. In 2014, a court in Shandong convicted a man named She Zhi Jiang for operating an illegal lottery business in the Philippines targeting Chinese online users, making illegal gains of 2.2 billion yuan. She remained a fugitive while eight of his accomplices were sentenced to jail for 15 to 24 months, according to the court documents.

The birthday and photo on the documents show that She Zhi Jiang is She Kailun.

Public information showed that She in 2014 registered a company called Chong Hua General Enterprises in the Philippines. The next year, a local newspaper reported that 154 foreign nationals employed by Chong Hua were deported by Philippine authorities for involvement in illegal online gambling. Chong Hua was fined 4.4 million pesos ($91,000) for the violations.

In January 2017, She obtained Cambodian citizenship and changed his name to Tang Kriang Kai, according to Cambodian government records. The same month, She registered Yatai International in Hong Kong with HK$100 ($13).

Since 2017, She became more active in public using the name She Kailun and earned nearly a dozen social titles.

In September 2017, She made a high-profile appearance at the annual World Chinese Entrepreneurs Convention in Yangon, Myanmar, during which he signed the agreement with local authorities to develop Yatai City. In December that year, She was named vice chairman of the CFOCE. She has repeatedly linked Yatai City with China’s Belt and Road initiative.

Yu Xinqi, a leader of the Chinese community in Thailand who has known She for three years, said She managed to set up connections with many overseas entrepreneurs in Hong Kong, including CFOCE chairman Zhong Baojia, and used such connections to expand his business reach.

But some people questioned She’s rise and the funding source of Yatai City. Several Chinese business leaders in the Philippines accused She of doing shady deals that damage the image of overseas Chinese entrepreneurs.

In August, the Chinese embassy in Myanmar issued a statement saying that the project “is a third-country investment and has nothing to do with the Belt and Road Initiative.”