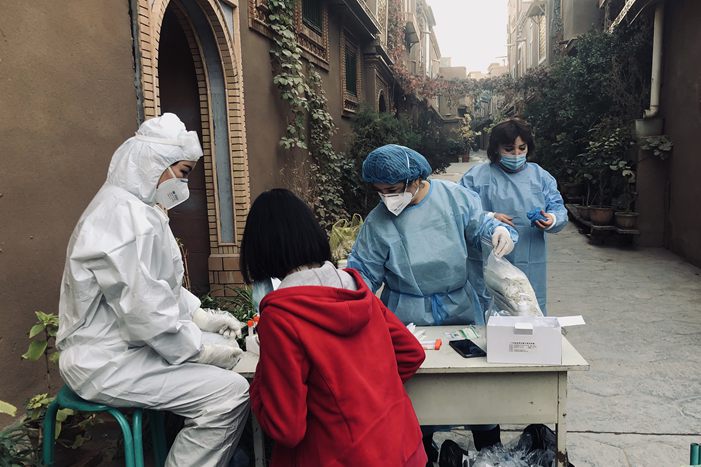 China’s far western prefecture of Kashgar has launched a mass testing program after more than 100 people tested positive for the coronavirus.

Disease control workers are testing the area’s 4.75 million people after 137 new asymptomatic cases were detected on Sunday, according to a statement (link in Chinese) from the health commission of the Xinjiang Uygur autonomous region, which administers Kashgar.

The new cases were linked to a garment factory where a 17-year-old girl who tested positive on Saturday worked, the commission’s deputy director Gu Yingsu said at a Sunday press conference (link in Chinese).

The outbreak represented the Chinese mainland’s first locally transmitted infections for 10 days, when one was discovered in the eastern port city of Qingdao. It also marked Xinjiang’s first new cases since August, when the region’s capital, Urumqi, enacted “wartime” lockdown measures to battle a local flare-up.

As of 2 p.m. Sunday, authorities had conducted nucleic acid tests on 2.84 million people in Kashgar, Gu said, adding that the prefecture aimed to complete the testing initiative by the end of Tuesday.

All schools except universities have been closed through Friday, but supermarkets and shopping malls remain open, the local government said.

Four areas in Shufu county to the west of the Kashgar metropolitan area have been identified as high risk, while the rest of the county is at medium risk and other cities and counties are at low risk, the Kashgar government said in a statement (link in Chinese) Sunday. The prefecture lies on the ancient Silk Road and borders Pakistan, Afghanistan, Tajikistan and India.

In other comments reported (link in Chinese) by state broadcaster CCTV, Gu said the girl who tested positive lived and worked in a clothing factory in Shufu, and last weekend visited a shopping mall and a bazaar. She is currently isolating at a designated hospital in Kashgar and is showing no symptoms of Covid-19, he added.

Some 831 workers at the factory tested negative for the virus on Saturday, Gu was reported as saying. However, he noted that tests on more than 400 of the girl’s close contacts returned 137 positive cases, all of whom are asymptomatic and currently in isolation.

The Chinese mainland does not include asymptomatic cases in its official Covid-19 tallies. A total of 20 new cases, all imported from abroad, were confirmed (link in Chinese) on Sunday, bringing the total caseload to 85,810, according to the National Health Commission. The death toll remained unchanged at 4,634.