Thanks to China, Pakistan’s First Metro Hits the Tracks 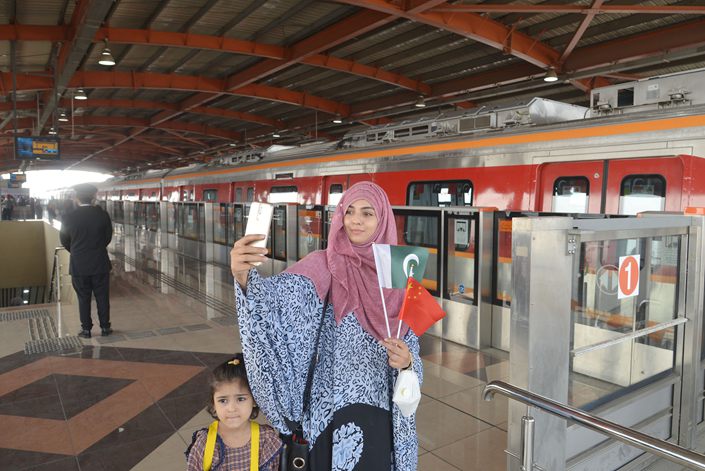 The Orange Line, with more than two dozen stations across 25.58 kilometers (15.8 miles) of the eastern city in Punjab province, is the first metro line in a country with little public transport that also perennially suffers from traffic congestion.

Completion of the Orange Line will shore up the China-Pakistan relationship as the two countries celebrate the 70th anniversary of diplomatic relations next year, China’s consul general in Lahore, Long Dingbin, said.

Announced during a visit by Chinese President Xi Jinping in April 2015, the Orange Line was jointly constructed by China State Railway Group Co. Ltd. and China North Industries Co. Ltd., with preferential loans of over $1.6 billion from the Export-Import Bank of China. The Punjab provincial government financed the rest of the project.

Guangzhou Metro Group Co. Ltd. is overseeing its operation and maintenance, the company announced in February.

The launch of this first line of a planned larger transit system comes more than four months later than expected, following years of pushback from environmentalist groups concerned that construction would endanger local landmarks, and increasing questions about the massive amount of debt Pakistan has taken on through Chinese-funded infrastructure plans.

A Lahore court in 2016 ordered a halt to construction around 11 historical sites and requested an evaluation of work being done to protect the remains, delaying the project’s completion by more than a year.

Although construction was finished in December last year, workers who returned to China for Spring Festival were stranded amid the initial breakout of Covid-19 in January. Guangzhou Metro had to recruit and train another 1,000 drivers, technical maintenance workers and station staff within 90 days.

Chinese foreign ministry spokesperson Zhao Lijian said at Monday’s press briefing the project had created more than 7,000 local jobs, and an additional 2,000 employment opportunities would be generated for future operations and maintenance.

The metro line is part of China’s massive Belt and Road initiative that encourages Chinese companies to invest in infrastructure, transportation and energy projects in countries across Asia, Africa and Europe. Beijing has been splurging to advance such facilities through the China-Pakistan Economic Corridor program that was valued at $46 billion in 2015.

Despite local criticism, governments on both sides were positive the metro line would reduce traffic jams in the city of 12 million people and carry more than 250,000 trips per day, as Caixin reported earlier. Each one-way ticket is priced at 40 rupees ($0.25) and the metro line covers in just 45 minutes a journey that takes 2.5 hours by car.