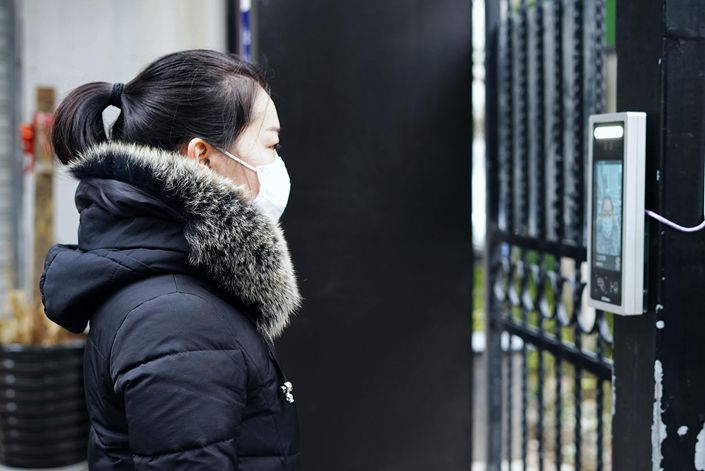 A resident has her face scanned on March 3 before entering a residential compound in Hangzhou, East China's Zhejiang province.

A major city in eastern China will consider restricting the use of facial recognition in residential areas, a sign that public angst about the potentially intrusive technology is starting to inform government policy.

Officials in Hangzhou, the capital of Zhejiang province, will mull a revised draft of municipal property management regulations that would make it illegal to demand residents submit to facial and fingerprint scans when entering their compounds.

If approved, the regulation would make the city — which is home to many internet firms including e-commerce behemoth Alibaba Group Holding Ltd. — the first place in China to explicitly write a facial recognition ban into local legislation.

It comes as national lawmakers contemplate a proposed Personal Information Protection Law that would only permit the public use of image acquisition and personal identification equipment for the purposes of maintaining public security.

Although Hangzhou lawmakers have been tinkering with the draft regulations since May, the section on facial recognition is a recent addition.

No such provision appeared in the version submitted to a legislative hearing held by the municipal justice bureau on Oct. 9, according to the Hangzhou Daily, a local state-run newspaper.

At the hearing, Guo Bing, a professor at Zhejiang Sci-tech University who made headlines last year for suing a local safari park for enforcing facial recognition, reportedly criticized the draft for lacking rules on personal privacy protections, citing a recent outcry in the city against property managers who installed facial recognition equipment in residential communities during the Covid-19 outbreak.

In recent years, a growing number of people in China have voiced concern about the arbitrary installation of facial recognition equipment in public areas, arguing that the country lacks adequate safeguards for the collection and use of personal data.

China’s national data security standard, which came into effect (link in Chinese) Oct. 1, recommends that entities that collect, transmit or store personal information gain the express consent of individuals before doing so. However, the standard is not mandatory and appears to have had little impact.

National legislators have criticized the draft Personal Data Protection Law, which was released to the public (link in Chinese) earlier this month, for not clarifying how facial recognition technology should be used in public, what roles the government should play in controlling it, and who is legally accountable for data leaks.