By Ju Yiwen and Lu Zhenhua 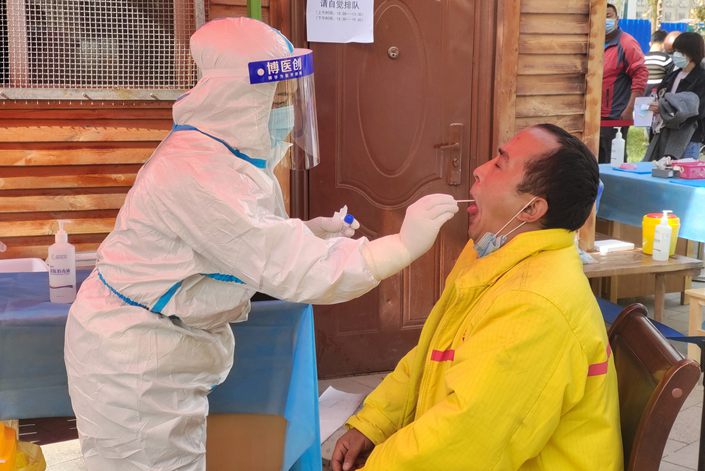 A resident in Kashgar takes a Covid-19 test Oct.28.

The infections were linked to a local garment factory, and authorities ruled out the possibility of further spread of the virus in the region.

Kashgar concluded mass testing Tuesday of all of its 4.75 million residents over three days and found 183 Covid-19 cases. The rest of the population tested negative, said Wang Xijiang, deputy director of the city's disease prevention and control center, during a press conference.

"The possibility of further spread of the virus in the region has been ruled out," Wang said.

All of the 22 newly confirmed patients reported Tuesday with mild symptoms were originally asymptomatic cases, Wang said. A total of 161 asymptomatic patients were found as of Wednesday.

The cluster of Covid-19 cases in remote Kashgar was linked to one of several garment factories set up in 2018 in Shufu county as part of a poverty alleviation campaign, Caixin reported Tuesday.

Esaiti Wulayinmu, the deputy secretary of the Kashgar District Administrative Office, confirmed at the press conference that the flare-up was mainly linked to a factory that employs 252.

Meantime, all local schools were shut down, although universities, supermarkets and shopping malls remained open.