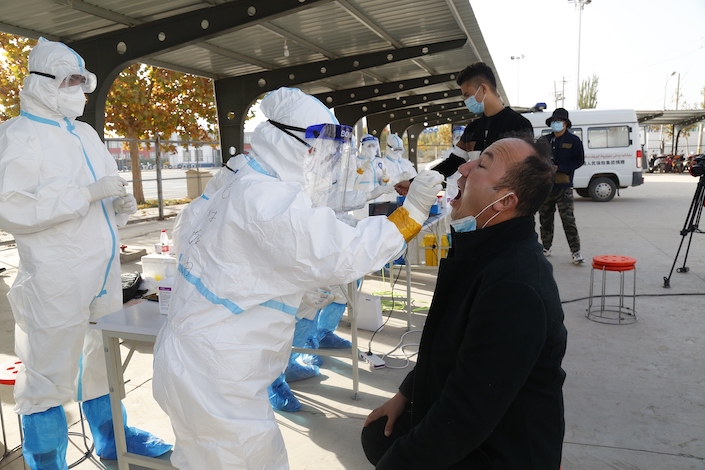 Kashgar prefecture is conducting mass testing of its entire population of 4.75 million.

A new cluster of Covid-19 cases spreading in the remote prefecture of Kashgar in far western China was linked to a garment factory designated to lift villagers out of poverty.

As of Monday night, 164 new asymptomatic cases were detected in Shufu county in the Xinjiang Uygur autonomous region, and all of the cases were related to the factory, Shuchang Garment Co. Ltd., a Kashgar official said.

The factory is one of many satellite operations set up in 2018 in Shufu county as part of a poverty alleviation campaign. The factory, which makes clothing, curtains and bedding, employs nearly 300 villagers, according to a magazine article published earlier this year.

The first case linked to the garment works was a 17-year-old girl who tested positive Saturday. Although she works at another factory, her parents work at the unit where all the other cases were found or linked to. The girl normally stays at her factory dormitory, but she had dinner with her parents at their factory dormitory Oct. 17, according to a statement from the local health commission. How the girl was infected and the source of the outbreak are still unclear.

Kashgar, an important gateway to Central Asia, is classified by the state as a region in deep poverty. Shufu county with 360,000 people is the most populated part of the relatively sparsely populated area. In 2018, several villages in the county set up satellite factories for poverty alleviation.

As of Sunday, the county government categorized four villages as high-risk areas, including the village where the garment factory is. The local health commission didn’t disclose whether cases were found in the three other villages, but they all have satellite factories.

Most workers in the factories are women who are local residents, one person told Caixin. The factories also give priority to hiring people with disabilities and in extreme poverty. Compared with people in large cities, the workers have much a smaller range of movement, the resident said.

Kashgar has since commenced mass testing of its entire population of 4.75 million. As of Monday evening, 4.47 million people were tested, and 2.13 million results were returned.

The outbreak represents the Chinese mainland’s first locally transmitted infections in 10 days, after an outbreak in the eastern port city of Qingdao. It also marked Xinjiang’s first new cases since August, when the region’s capital, Urumqi, enacted “wartime” lockdown measures to battle a local flare-up.

The 164 asymptomatic cases make the outbreak different from recent flare-ups in other Chinese cities, said Jiang Qingwu, an epidemiologist and former dean of the School of Public Health at Fudan University. Considering that the Kashgar outbreak was found in a factory and mainly among younger people, who normally show no symptoms or fewer of them, the high percentage of asymptomatic cases makes sense, Jiang said in an interview with China’s state-run broadcaster CCTV.

The Kashgar outbreak may indicate that the virus has been transmitted for a while, and it may increase the difficulty for prevention and control, Jiang said.