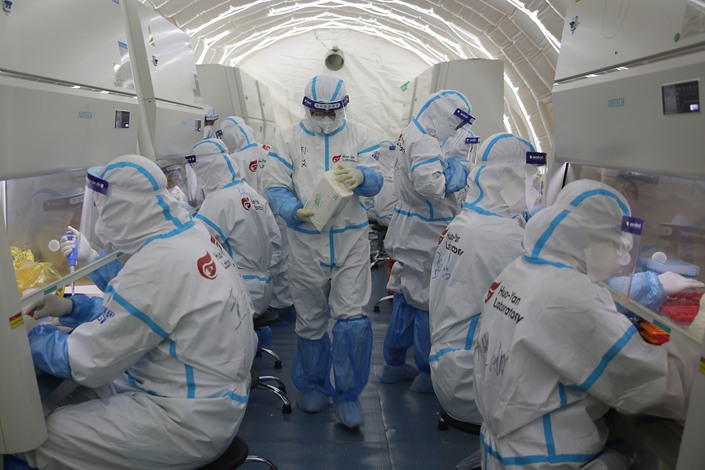 The discovery, which was announced Saturday by the Chinese Center for Disease Control and Prevention (China CDC) in an online statement, marks the first time that active coronaviruses have been found on packaging under the extreme conditions of cold storage.

“This finding suggests that attention should be paid to the risk of importing the virus through contaminated items in the cold chain, while also guarding against the entry of infected people from overseas,” the statement said (link in Chinese).

According to the China CDC, the active viruses were found on the outer packaging of frozen cod products in the coastal city of Qingdao, which finished testing nearly 11 million people last week after logging 13 new cases linked to two dockers. The cases were China’s first local transmissions for more than two months.

China CDC’s Director Gao Fu told Caixin in an interview that the discovery was the first time the disease control body had successfully “isolated” an active coronavirus that could conceivably infect people, as opposed to previous work that had focused on “detecting” the presence of inactive virus fragments that pose less of a threat to public health.

Experts have previously postulated that the coronavirus could spread through the so-called “cold chain,” the term given to the production, storage and transportation of goods at low temperatures. Viruses can remain active for long periods in subzero conditions, including the refrigerated containers used to move meat, seafood and other perishables across the globe.

Still, the China CDC said the risk of contracting the virus through contact with cold-chain foods was “very low.” Previous tests on more than 3 million cold-chain samples, including 670,000 items of food and packaging, yielded just 22 positive results, according to the statement.

Several recent coronavirus flare-ups in China have been linked to imported frozen goods. Prior to the Qingdao outbreak, officials battling a Covid-19 cluster in the northeastern city of Dalian suggested contaminated seafood as the source of infection.

In June, Chinese consumers shunned imported salmon after a coronavirus outbreak in the capital was linked to chopping boards used to prepare the vibrantly colored fish.