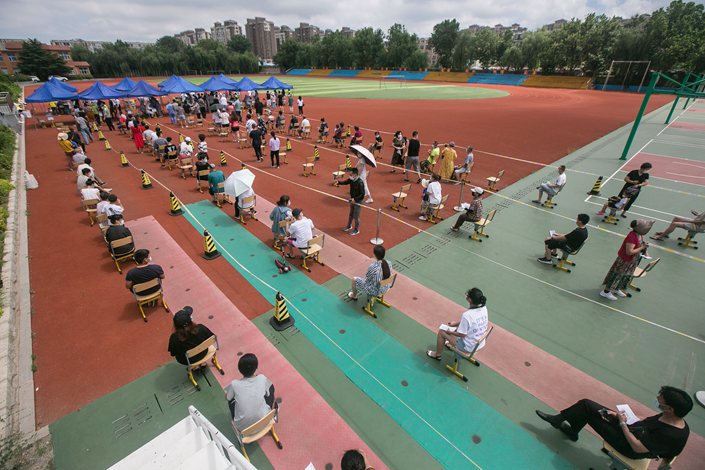 China’s top epidemiologist said Wednesday that the latest Covid-19 outbreak in the northeastern city of Dalian had largely been brought under control, with the new case count declining to single digits for three straight days despite a spike nationwide.

The outbreak in the Liaoning province port city, which has recorded 57 cases since last week and spread to nine cities including Beijing, is most likely to have been caused by contaminated imported seafood, said Wu Zunyou, chief epidemiologist of the Chinese Center for Disease Control and Prevention.

Wu pointed out the link between seafood processing, sales and China’s major Covid-19 outbreaks in Beijing, Dalian and Wuhan — where the virus emerged late last year. The cold, humid environments, such as seafood markets, are more conducive for the virus to thrive, he added in an interview with national broadcaster CCTV.

The Chinese mainland has seen its highest daily increase since the end of Wuhan’s outbreak in April, recording 105 new confirmed cases on Thursday. Ninety-six were in the far western region of Xinjiang, five were in Liaoning, one was in Beijing and three were imported from overseas, according to the National Health Commission (link in Chinese).

While Xinjiang has reported (link in Chinese) 414 confirmed cases, 143 asymptomatic cases, and over 12,000 people under medical observation over the past two weeks, the source of infections is still unclear. All cases in the latest outbreak were in its capital city of Urumqi and had not traveled abroad, according to local health authorities.

On Thursday, one case was reported from Beijing, which has recorded cases for three consecutive days after an outbreak linked to a wholesale market subsided in early July. The new confirmed case was believed to be the grandson of the patient reported on Tuesday who had dined with an asymptomatic carrier who had previously been in Dalian, according to the capital’s health commission (link in Chinese).

Chinese Vice Premier Sun Chunlan visited Dalian on Monday and Tuesday to learn about the local epidemic after a tour of Urumqi last week. Most of the confirmed cases in Dalian were employees of Dalian Kaiyang World Seafood Co. Ltd. or their close contacts, according to Zhao Lian, deputy director of Dalian’s health authority.

Wu said he was sure the contagion in Dalian was “imported” as the city had not recorded any new cases for nearly four months. He also said that once a humid and cold environment such as at Kaiyang World Seafood, became contaminated, the virus could proliferate and would not be easy to deactivate, triggering risks of spreading.

Wu also revealed an experiment carried out in Beijing’s Xinfadi wholesale market from which the capital’s outbreak in June was thought to originate. The researchers used fluorescent powder to simulate the virus and trace it. They concluded the virus could infect people through aerosols in contaminated environments.

To protect people in such environments from the virus, Wu urged places like seafood markets or processing companies to get adequate ventilation to help reduce the risk of infection.