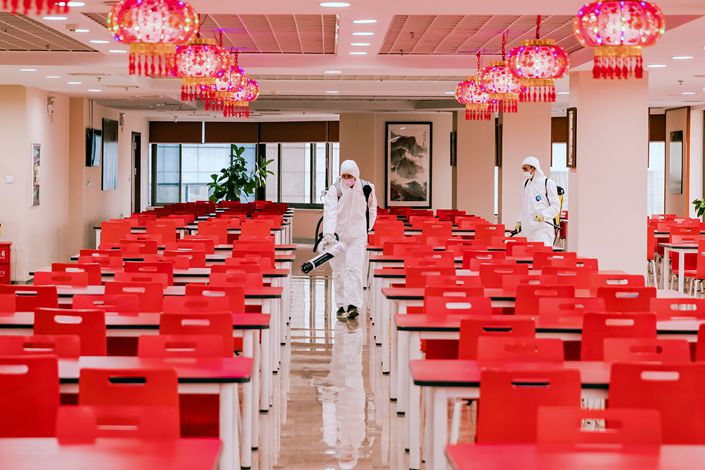 A bank's canteen is disinfected in Dalian, Liaoning province, on July 24.

Beijing reported one new local Covid-19 case on Tuesday, its first in 21 days, as infections linked to the latest flare-up in Northeast China have spread to nine cities around the country.

The 53-year-old Beijing patient had dined with an asymptomatic carrier who had previously been in the Liaoning province port city of Dalian, where 44 cases have been reported since last week, the capital’s health commission reported (link in Chinese). The pair met in Jinzhou, another Liaoning city.

Cases linked to the Dalian outbreak, which is thought to originate with a seafood importer, have been detected in cities in five provincial-level regions, including the southern province of Fujian and as far north as Jilin and Heilongjiang provinces, said Zhao Lian, deputy director of Dalian’s health authority, on Tuesday.

China is seeing its greatest daily new Covid-19 figures in months, recording 68 confirmed cases on Tuesday, of which 57 were in the far western region of Xinjiang and six were in Liaoning, according to the National Health Commission (link in Chinese). Beijing reported two coronavirus cases on Tuesday, one of which was imported from overseas.

Beijing government spokesperson Xu Hejian said at a Tuesday conference that the capital will “strictly implement medical observation measures” for inbound travelers from medium- and high-risk areas in Dalian and Xinjiang’s capital Urumqi, the epicenter of its outbreak.

The capital is also encouraging its residents not to take trips to medium- and high-risk areas, Xu said. Pang Xinghuo, deputy director of the Beijing Center for Disease Control and Prevention, said people with fever or respiratory symptoms should avoid long-distance travel.

Beijing’s new case has sparked particular concern as it was found in one of Asia’s most populous residential communities, which reportedly houses over 700,000 people. Residents of the Tiantongyuan community began to receive nucleic acid testing on Tuesday morning.

The Liaoning government on Sunday ordered all of the province’s prefecture-level cities besides Dalian, 13 in all, to impose a 14-day mandatory quarantine on people who have arrived from Dalian’s medium- and high-risk areas since July 14.

While Dalian has not declared a citywide lockdown, residents of medium- and high-risk areas are banned from leaving “in principle.” Public transportation has been shut down and residential compounds in those areas are sealed off to outsiders.

Residents of the city’s low-risk areas require a negative coronavirus test result from the previous seven days to leave. The city also announced Tuesday it would suspend gatherings in restaurants.

The nine cities which have reported infections linked to Dalian are Tieling and Anshan in Liaoning; Siping, Changchun and Baicheng in Jilin; Hegang and Suihua in Heilongjiang, Fuzhou in Fujian; and Beijing.

Fuzhou said it entered “wartime mode” on Monday after an asymptomatic case was reported. The city has since collected around 1,500 samples from people who had been in contact with the patient for nucleic acid testing. The provincial capital said (link in Chinese) it was taking the “strictest” measures “to contain the coronavirus.”

The resurgence in Dalian began on July 22 when an employee of Dalian Kaiyang World Seafood was confirmed to have Covid-19. The government of Dalian has collected samples for testing from about half of its 6 million residents in the past few days.

Urumqi, which has recorded 311 cases since mid-July, has launched a similar testing campaign for its 3.5 million residents which is nearing completion, although the source of infections remains unclear.

This story has been updated to correct the name of the government agency where Zhao Lian works. It is the Dalian health authority.