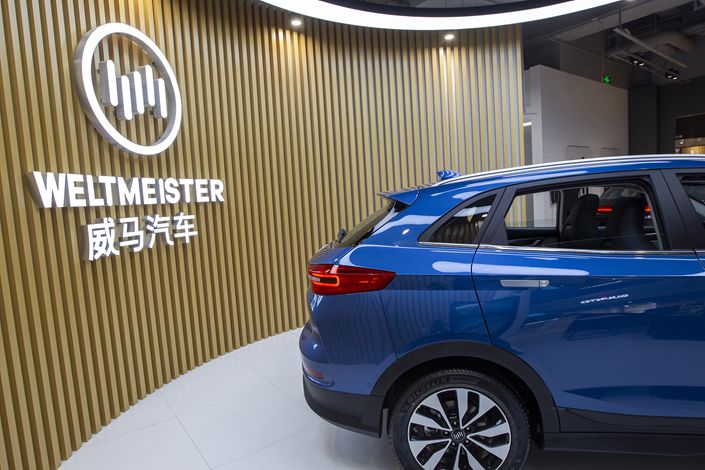 A Weltmeister showroom in Shanghai on June 6.

Tencent Holdings Ltd.-backed electric vehicle manufacturer Weltmeister Motors has issued an urgent recall notice for more than 1,200 of its flagship EX5 400 electric cars after a third caught fire in as many weeks, the market regulator confirmed in a notice Wednesday.

The recall involves 1,282 Weltmeister vehicles delivered since June, all with lithium batteries supplied by a unit of telecom giant ZTE Corp. The batteries in question contain impurities that were mixed in by the battery supplier during the production process, the State Administration for Market Regulation (SAMR) (link in Chinese) notice said.

The regulator instructed anyone who owned a Weltmeister vehicle with a ZTE Lithium battery with the model number ZNP3914895A-75A to cease driving it immediately and contact their Weltmeister dealer for assistance.

“In extreme cases, the battery can short-circuit, causing a thermal runaway and a risk of fire, which poses a safety hazard,” the SAMR said. A thermal runaway is a kind of positive feedback loop that can continue to increase the temperature.

The SAMR statement did not say the batteries were responsible for any specific incidents, but the notice came after an EX5 model car caught fire outside the Institute of Mechanics in northwestern Beijing on Tuesday.

That followed similar incidents on Oct. 5 and Oct. 13 in the city of Shaowu in East China’s Fujian province, where two of a batch of 80 electric cars purchased from Weltmeister for use as taxis caught fire. The cars went into service on Oct. 1.

But concerns have been raised after ZTE said that, while the batteries used in Shaowu taxis were its own, the incident in Beijing did not involve its batteries. No casualties were reported in any of the incidents.

Weltmeister began contacting car owners as early as Oct. 16, telling them not to charge their cars and to return them to the local dealership for maintenance.

The recall comes as Shanghai-based Weltmeister prepares for an IPO on the city’s STAR Market. The firm last month raised 10 billion yuan ($1.49 billion) in a Series D funding round.

The breakneck development of China’s new-energy vehicle industry, which has been supported by generous state subsidies and received policy support at the highest levels, has seen various startups enter the space and try to ride the wave of growing interest.

But it has also raised safety concerns. According to Shanghai-based news site The Paper, there were 23 recorded incidents of NEVs catching fire from May to August.

The market regulator has been tightening oversight, and last October it issued rules requiring carmakers to report any incident where a car smokes or catches fire within 12 hours of the event, and within 6 hours if anyone is hurt.

The sales of Weltmeister’s EX5 model have been strong since its launch in 2018, with nearly 36,000 cars delivered as of September. The firm sold a total of 6,200 cars in the third quarter, reflecting almost 80% growth year-on-year as the nation’s economy recovers from the impact of Covid-19.

SAMR data shows October was a high water mark for electric vehicle recalls in China, after Tesla recalled 30,000 of its China Model S and Model X vehicles on Oct. 23 over a suspension issue. Smaller manufacturers Polestar and Leapmotor all have active recalls running.