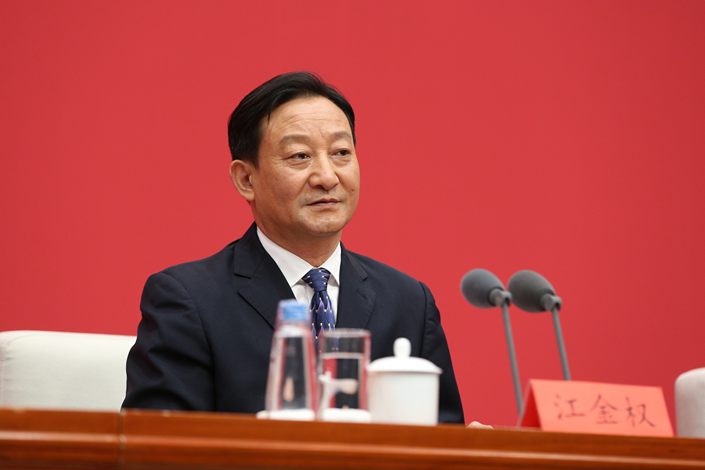 The right-hand man of Politburo member Wang Huning (王沪宁) has been tasked to head the Communist Party think tank responsible for drafting the flagship theories of China’s top leadership.

According to a Thursday statement released by the State Council, Jiang Jinquan (江金权), 61, will be the new head of the influential Central Policy Research Office (CPRO), where he has been in charge of day-to-day affairs since February 2018.

Wang, a member of the Communist Party’s top decision-making body, the Politburo Standing Committee, had helmed the CPRO since 2002.

Wang is regarded as one of the party’s most influential political theorists, playing a significant role in drafting former leaders’ theories — including Jiang Zemin’s “three represents” and Hu Jintao’s “scientific theory of development.”

On Friday, Jiang made his first public appearance as CPRO director (link in Chinese) during a Communist Party Central Committee press conference, according to the official Xinhua News Agency, discussing the plenary session that laid out the guidelines for the country’s five-year plan from 2021 to 2025.

Jiang was part of the team which drafted documents for the 19th Communist Party Congress and contributed to rewriting the party constitution in 2017.

Jiang left his job as CPRO deputy director in May 2016, to become head of a party disciplinary team stationed at the State-owned Assets Supervision and Administration Commission. About two years later, he returned to his old post under Wang at the think tank.

He is a graduate of the prestigious Huazhong University of Science and Technology’s School Of Economics, while his former boss Wang was previously a politics professor at Shanghai’s elite Fudan University.