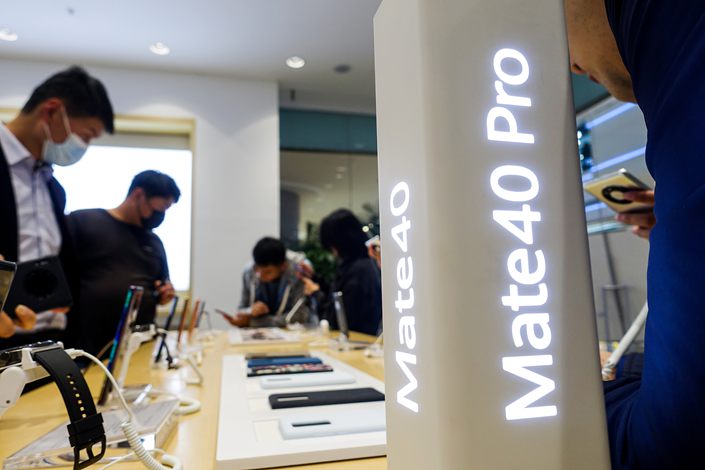 Embattled telecom giant Huawei Technologies lost its briefly-held crown as the world’s largest smartphone maker, new third-quarter data showed on Friday, as it struggled in the face of a crippling U.S. campaign to deprive it of key components for its most important product.

Huawei’s smartphone shipments plunged 22% in the three months to September to 51.9 million units, causing the company to fall to No. 2 on the list of top companies for the period with 14.7% of the global market, according to market research company IDC.

The top spot was reclaimed by South Korea’s Samsung, whose third-quarter shipments rose 2.9% to give it 22.7% of the global market.

The trading of places marked a major reversal from the previous quarter when Huawei edged out Samsung for the global title with 20% of the market to its Korean rival’s 19.5%. In addition to big declines in global markets where Huawei has been retreating this year, the company also saw a 15% decline in its home China market, IDC said.

Huawei’s exit from global markets follows U.S. actions last year that severed its ties with Google, maker of the free Android operating system that powers most of Huawei’s phones. While Huawei continues to use a free version of Android in its new models, it can no longer access many of Google’s core services such as Google Play, Gmail and Google Search that are absent in China but popular among customers in the rest of the world.

As it pulled back globally, the company redoubled its focus on China where it was challenging Samsung and Apple at the high end of the market. But even there, it has started to ration its phones due to a finite and dwindling stockpile of smartphone chips after the U.S. took action earlier this year to cut off that supply line.

“The company continues to face challenges due to the ever increasing impact of the U.S. sanctions, which are taking a toll on its performance even in China as the brand is trying to pace out its shipments over a longer period,” IDC said in a statement.

As Huawei slid, Chinese peer Xioami moved in the opposite direction by posting a 42% shipment surge that drove it past Apple to become the world’s third largest brand for the quarter, finishing less than 2 percentage points behind Huawei with 13.1% of the market. The company benefitted from its strong presence in both its home China market as well as India, where it is the No. 1 brand with more than a quarter of the market.

The strong performance helped to lift Xiaomi’s Hong Kong-listed stock by about 2% in Friday trade, even as the broader Hang Seng Index was down by a similar amount.

While Huawei’s tumble and Xiaomi’s rise looked like a changing of positions, that was less the case due to the two companies’ focuses on different parts of the market, said IDC analyst Will Wong. Whereas Huawei is squarely focused on the middle to high end, Xiaomi is focused on the lower end, he noted. “Xiaomi, along with Vivo and Oppo, can’t immediately fill the gap left by Huawei,” he said.

One company with more potential to fill that gap is Apple, which has been making lower-priced iPhone models in a bid to be more competitive with Huawei and Samsung. But Apple suffered a 10.6% shipment drop globally in the third quarter, according to IDC. And the company’s own latest quarterly results released Thursday in the U.S. showed that revenue from its Greater China region tumbled nearly 30% for the three-month period, even as its global revenue was roughly flat.

Wong pointed out that Apple’s relatively weak showing in China, and throughout the world, was likely due in part to the late release of its latest iPhone 12 phones, which only hit the market about a week ago. Thus the company is likely to see a sales surge in the fourth quarter as buying momentum picks up. “Looking ahead, we expect Apple to grow in coming quarters with strong early demand for iPhone 12 paired with robust trade-in offers across major carriers, especially in the U.S.,” IDC said.

On the broadest basis, smartphone shipments worldwide fell by 1.3% to 353.6 million units in the third quarter, as the industry continues to suffer from several years of oversaturation combined more recently with dampening effects from the global pandemic. But the third-quarter decline was notably less than a 16% drop the previous quarter, and an 11.7% decline in the first quarter.