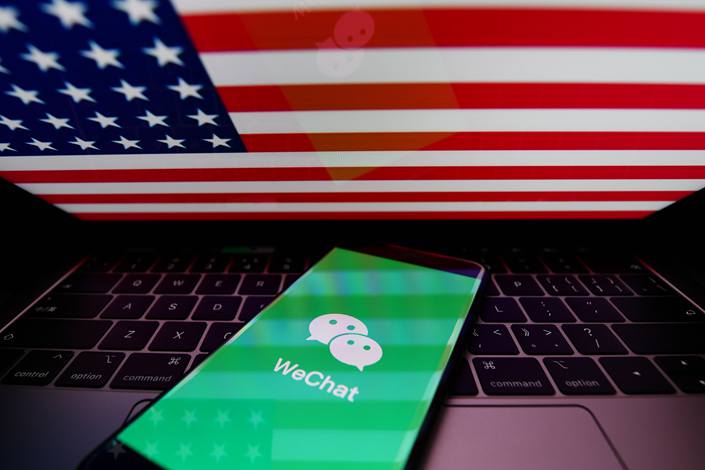 Claiming to represent only “the most ordinary” WeChat users in the United States, the alliance has so far successfully argued that Trump’s ban could unlawfully sever their communications with people in both the U.S. and China.

Millions of WeChat users in the U.S. could breathe a temporary sigh of relief after an appeals court this week quashed a government request to restrict China’s biggest social messaging app in the United States.

The decision marked a new setback for an executive order issued by U.S. President Donald Trump in August banning WeChat on national security grounds. The platform has around 1.2 billion users, including some 19 million in the United States.

Claiming to represent only “the most ordinary” WeChat users in the United States, the alliance has so far successfully argued that Trump’s ban could unlawfully sever their communications with people in both the U.S. and China, where the app’s near-ubiquity makes it a virtually essential part of daily life.

To co-founder Cao Ying, the alliance also represents a rare show of collective resistance from the Chinese community in the United States. “This is unprecedented,” she told Caixin in a phone interview. “Never before have Chinese Americans challenged a presidential order (in this way).”

At least for now, WeChat users in the United States can continue to use the app as normal. But the case is far from over.

On Monday, a three-judge panel for the Ninth Circuit Court of Appeals unanimously refused a Justice Department request to stay a preliminary injunction preventing the U.S. government from imposing a WeChat ban, pending an appeal, saying the U.S. government had “not demonstrated that they will suffer an imminent, irreparable injury during the pendency of this appeal, which is being expedited.”

The decision followed a similar move last week by Magistrate Judge Laurel Beeler, who said the administration’s request would “burden substantially more speech than is necessary to serve the government’s significant interest in national security.”

The appeals court is expected to issue a more substantive ruling on the merits of the injunction in January, though a final judgement on the ban itself remains some way off.

The USWUA called Monday’s decision “another important victory” for WeChat users. The Justice Department did not comment on the ruling, but previously said the injunction allows the “unfettered” use of an app “that the Executive Branch has determined constitutes a threat to the national security and foreign policy of the United States.”

The USWUA said it expected the government to appeal the ruling to the U.S. Supreme Court “soon,” adding that its lawyers would “continue seeking all available legal remedies to prevent the WeChat ban.”

Michael Bien, a lawyer at the San Francisco-based practice Rosen Bien Galvan & Grunfeld LLC and lead counsel for the USWUA, told Caixin in a phone interview that the unanimity of the decision was “a good sign that the Supreme Court will not interfere at this time,” a circumstance that would likely mean the injunction would remain in place “at least for the several months it’ll take for the litigation to move to the next stage.”

Shaken by Trump’s Aug. 6 order, the eventual founders of the USWUA took to WeChat to mobilize their response.

Cao first read about the WeChat ban on the app itself. For the New Jersey-based lawyer, a Beijing-born naturalized U.S. citizen who uses WeChat to speak to her elderly parents back in China, the proclamation struck close to home — but also sparked doubts about its legality.

For one thing, the order seemed vaguely worded, Cao told Caixin. It prohibited any “transaction” related to WeChat or its parent company, Tencent Holdings Ltd., but did not say what the term meant, stating merely that Commerce Secretary Wilbur Ross would define it 45 days later when it took effect.

“From my perspective as a lawyer, I don’t know what is prohibited,” Cao said, noting that the order could theoretically give the Department of Commerce discretion to order sweeping sanctions on the app and its users before the affected parties could react to them.

To Zhu Keliang, a USWUA co-founder and lead attorney for the case, the order signaled an “extreme” attempt to completely outlaw the use of WeChat by ordinary citizens in the United States — an act he said may violate the First Amendment of the American constitution, which prevents the government from restricting free speech.

In the days after Trump announced the order, Zhu, a Silicon Valley-based attorney, posted messages questioning its legality into a WeChat group Cao managed for about 200 U.S.-based lawyers of Chinese heritage. After several colleagues voiced support, the pair banded together with three other lawyers and went on to register the USWUA as a nonprofit in New Jersey.

In an open letter published Aug. 8, the alliance outlined its intention to “defeat” the order, claiming that it “violates many provisions of the U.S. Constitution” and the Administrative Procedure Act, which governs how federal agencies develop and issue regulations.

The USWUA’s stated independence from corporate backers has helped to fuel a thriving crowdfunding campaign that has so far kept ahead of the group’s mounting legal costs.

The alliance positions itself as a representative for “average” WeChat users in the United States and claims to have no ties to WeChat or Tencent. Four USWUA-linked lawyers interviewed by Caixin all said they had never communicated with or previously represented the Chinese firms. Both WeChat and Tencent declined to comment.

Cao, who acts as a trustee for the group, said the alliance did not accept donations via WeChat Pay, which is typically linked to Chinese bank accounts, or from outside the U.S. Most donations were small sums from concerned individuals paid via platforms like PayPal, Venmo and Zelle, she added, although it was “not possible” to vet every donor.

In August, as word of the organization spread through the American WeChat-using community, donations started pouring into the USWUA. Gao Yuan, a China-born financial analyst for a major Wall Street bank, chipped in $50. “Chinese people in America … have to stand together to fight this injustice,” he told Caixin in a phone interview. “Trump doesn’t care about national security; he just wants to look tough on China. We’re the tools for him to do that.”

Less than three weeks after issuing its call for donations, the USWUA blew through its initial fundraising target of $100,000, according to the group’s website. After securing the injunction on the ban Sept. 20 — hours before the ban was due to take effect — the group’s coffers swelled from $400,000 to more than $1 million in just two days, after which donations were suspended.

In interviews with Caixin, USWUA lawyers described Trump’s WeChat ban as unconstitutional and racially targeted against Chinese communities in the United States.

Zhu, the lead attorney, condemned the proclamation as the Trump administration’s latest attempt to incite racial hostility toward Chinese Americans, a move in line with referring to the deadly coronavirus as the “China virus,” shutting down Beijing’s consulate in Houston, Texas, and canceling the visas of U.S.-based Chinese students. “This is not an accident,” he said.

USWUA representatives also slammed what they characterized as the government’s submission of voluminous, but ultimately insubstantial, evidence to support its national security claims.

Angus Ni, a Seattle-based attorney who represents the USWUA, said the government had engaged in “ex-post-facto justification seeking” as the bulk of the evidence it submitted in support of the WeChat ban was created after Aug. 6 — the day the proclamation was issued. “They had nothing before the Trump order came out. No reasons, no evidence, no substantiation. It was just a whim,” he said.

Subsequent developments called into question just how extensive — and effective — the ban would even be. In September, a U.S. Commerce Department regulation said the ban would target American companies providing services to “distribute or maintain” WeChat in the U.S. —app stores, for instance — but mentioned no penalties for individual app users.

By that point, many U.S.-based WeChat users had found ways to skirt a blackout of the app, with several telling Caixin they had preemptively downloaded alternative messaging apps or virtual private network software to access WeChat from locations outside the country.

“I think it’s not a big deal for me,” said Ren Yiqiu, a Chinese college student based in the United States. “If the U.S. bans WeChat, I’ll use VPN. If the App Store doesn’t provide a download, I can change my country in the settings to China. That’s how I use the Chinese versions of TikTok and (online game) PUBG.”

Neither the Commerce nor the Justice departments responded to multiple Caixin requests for comment prior to publication.