Editorial: Economic Policy Must Recognize That China’s Domestic and Overseas Markets Reinforce Each Other 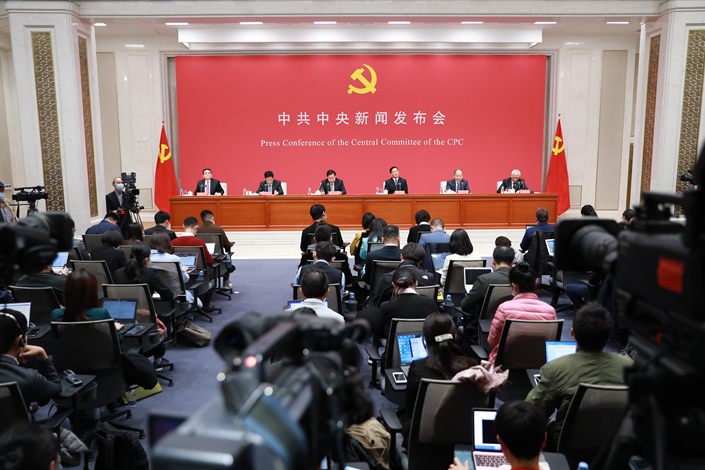 The CPC Central Committee held a press conference on Friday to answer questions about the fifth Plenary Session.

China is drawing up the blueprints for its highly anticipated 14th Five-Year Plan. The Fifth Plenary Session of the 19th Central Committee of the Communist Party of China, which closed a few days ago, deliberated and approved proposals on formulating the plan for national economic and social development through 2025 as well as long-term goals for 2035.

The communique from the plenary proposes speeding up the construction of a “dual circulation” development pattern that relies less on global integration and more on an expansion of domestic commerce.

Accelerating the construction of the dual circulation model will be a key task during the period of the next five-year plan. It will also be a critical time for the forming new patterns. We believe that this strategic deployment should be fully and accurately understood. Under the premise of rooting themselves in domestic circulation, governments at all levels should also work hard on mutually promoting both cycles.

Since Chinese policymakers put forward the concept of dual circulation during this year’s Two Sessions political meetings, the relevant requirements have undergone a transition from “gradual formation” to “accelerated construction,” reflecting how urgently the government sees the task ahead. Decision-makers have clearly and comprehensively expressed that domestic and international cycles should promote each other.

Regrettably, some people have — deliberately or otherwise — neglected mutual promotion while emphasizing the primacy of the domestic cycle. In their eyes, dual circulation apparently represents two parallel tracks, either or which can be substituted for the other. They think the emphasis on domestic circulation is because international circulation has run into trouble. It must be said that this is a misunderstanding and will inevitably have an adverse effect in practice.

Constructing a new dual circulation model is a strategic decision made by Chinese policymakers based on changes in the country’s development stage, environment and conditions. In the past 40 years, China has achieved rapid economic growth in accordance with the concept of “two markets, two kinds of resources” — one at home and one overseas. This has helped it become the world's second-largest economy.

“We must always treat both the primacy of the domestic cycle and the mutual promotion of domestic and international cycles as one organic whole — we cannot have one without the other.”

However, times have changed. Since the global financial crisis, the growth rate of the global economy and trade has slowed greatly, and the proportion of exports in the Chinese economy has gradually decreased.

From a domestic perspective, China’s economy has shifted to a stage of high-quality development, and profound changes have taken place in its industrial structure. In recent years, we have continuously deepened supply-side structural reforms and actively expanded opening-up.

However, there are also shortcomings in our economic and social development. In addition, the Sino-U.S. trade frictions have worsened China’s external environment, and the coronavirus epidemic has complicated the situation. As the communique said, we must have a deep understanding of the new characteristics and requirements brought about by the changes in the main contradictions of our society, and the new contradictions and challenges brought about by the complex international environment.

In terms of its contribution to total economic growth, domestic circulation has always played a dominant role in large countries like China. Yet in terms of improving the quality and efficiency of economic development and injecting vitality, international circulation sometimes plays a major role.

At the beginning of reform and opening up, China typically relied on export-oriented processing industries. However, as our economic development level improves, our industrial structure changes, and land and labor costs continue to rise, this model urgently needs to be transformed.

At the same time, we must pay more attention to domestic demand — especially when it comes to boosting consumer demand — in order to better balance the domestic and international cycles. This is the only way for China to complete the 14th Five-Year Plan and move toward its long-term goals for 2035.

In essence, domestic and international circulation are integrated. No matter where products and services are ultimately exported, all enterprises are part of a common economic and social system, and their industrial and supply chains are interconnected.

Of course, in certain regions, industries and time periods, there may be a certain gap between the two. For example, due to the high transaction costs of domestic trade in the past or the wider overseas market for their products, some companies would pivot toward the international market. Individual companies have also grown into global industry giants.

However, the technological decoupling and technology blockade of recent years have forced those companies to look inward. The so-called “chokepoints” they now face fully shows that without the support of domestic circulation, sooner or later international circulation will meet difficulties. In the mid-to-long term, the domestic and international cycles result in either prosperity for all or losses for all.

How to strengthen mutual promotion between the two? The key is to build their common systems and mechanisms as well as a unified, open, competitive and orderly market system.

As stated in the plenary communique, promoting high-quality development, deepening supply-side structural reforms and driving reform and innovation can accelerate the construction of a modern economic system and promote the modernization of the national governance systems and capabilities. The focus is on expanding and upgrading consumption, upgrading our industrial structures, innovating in technology, allowing the free flow of productive elements and spurring regional integration.

The academic community has already made suggestions on specific measures, such as promoting the internationalization of the yuan and stressing the development of the digital economy. Experts and scholars have unanimously called for the implementation of wider, broader, and deeper opening up to the outside world. Some scholars suggested joining the Comprehensive and Progressive Agreement for Trans-Pacific Partnership (CPTPP) as soon as possible. Policymakers are free to follow the best of these recommendations as they please.

Two major obstacles to the mutual promotion of dual circulation are the facts that reform tasks in key areas remain arduous and our capacity for innovation does not yet meet the demands of high-quality development. To this end, we must make breakthroughs in systemic reform in key areas, such as state-owned enterprises, land, household registration, and social security, in accordance with established top-level designs and action plans.

It was stated at the plenary session that, during the period covered by the next five-year plan, China must “adhere to the core position of innovation in the overall situation of the country’s modernization drive and make scientific and technological self-reliance a strategic support for national development.”

Building an innovative society has long been on China’s agenda. The technological blockade encountered by some companies internationally has also forced us to improve our innovation capacity. However, technological innovation also needs the support of institutional innovation, which can’t be achieved by simply increasing capital investment.

During the period of the 14th Five-Year Plan, the successful construction of a new dual-circulation development pattern is of decisive significance. For this reason, we must always treat both the primacy of the domestic cycle and the mutual promotion of domestic and international cycles as one organic whole — we cannot have one without the other.