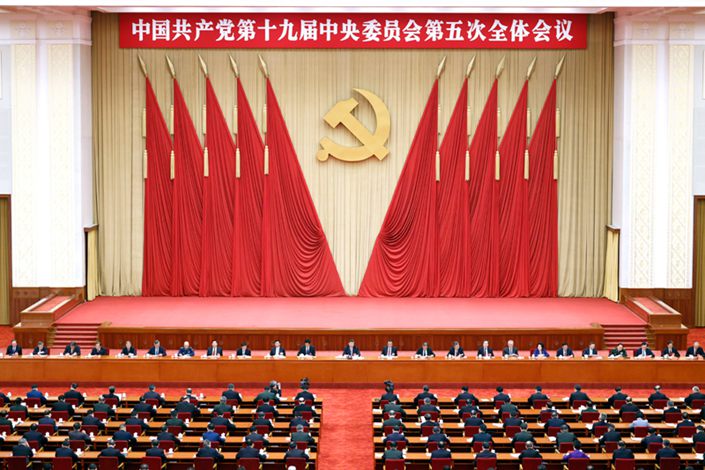 The communique offers the first glimpse of the governing party’s planned social and economic policies and targets for the next five years.

China’s top leaders have approved an economic and social blueprint for the coming five years that emphasizes quality growth over rapid expansion, and prioritizes domestic demand and technological independence in the face of rising external challenges.

The broad outline of the country’s 14th Five-Year Plan covering 2021 to 2025 was released by the Communist Party on Thursday after a four-day closed-door meeting in Beijing, according to a communique (link in Chinese) released by the official Xinhua News Agency. The meeting also signed off on long-term targets for the economy by 2035.

The communique offers the first glimpse of the governing party’s planned social and economic policies and targets for the next five years. A more detailed description of the 14th Five-Year Plan will be released in coming weeks. And the final version will be unveiled after it obtains approval by the country’s top legislature, the National People’s Congress, at an annual meeting that usually takes place in March.

China faces a complicated international situation, and arduous tasks of domestic reform, development and stability, especially amid the serious impact of the Covid-19 epidemic, the communique said. The plan plays down economic growth targets, and reiterates the “dual circulation” strategy, which involves making the economy more reliant on the domestic cycle of production, distribution and consumption through continued reform.

The new five-year plan puts emphasis on more-sustainable growth with a focus on improving the economic structure, according to the communique. Unlike the previous five-year plan outline (link in Chinese), which reiterated the party’s plan to double GDP from 2010 to 2020, the latest outline didn’t mention any specific numeric goal for GDP growth and repeated a call for higher-quality growth.

But still, Beijing remains ambitious about the country’s long-term economic development potential. The four-day policy meeting set a goal of GDP per capita reaching the level of moderately developed countries by 2035.

That means China aims to reach GDP per capita levels similar to those of South Korea, Israel or Spain over the next 15 years, ANZ Research said in a Thursday research note. The GDP per capita numbers of these countries are between $35,000 and $40,000, compared with China’s $10,261 in 2019.

In addition, the communique prioritizes innovation and technology independence as a “strategic pillar” to future development as the economy has been under pressure from worsening relations with the U.S. and the prospect of technology and supply chain decoupling.

Han Wenxiu, an official with the party’s Central Committee for Financial and Economic Affairs, said (link in Chinese) at a Friday press conference that working towards technological self-reliance doesn’t mean China will close its door to the world. He also said that economic decoupling from the U.S. is unrealistic.

Wang Tao, head of China economic research at UBS investment Bank AG, said she expects the new five-year plan will raise the target for research and development spending to around 3% of GDP in 2025 from 2.5% in 2020 (link in Chinese). Wang said China will also invest more in “new infrastructure” including 5G networks, artificial intelligence and data centers in the plan.