In Depth: Consumers Give China’s AR Startups a Reality Check

By Zhang Erchi and Jiang Yaling 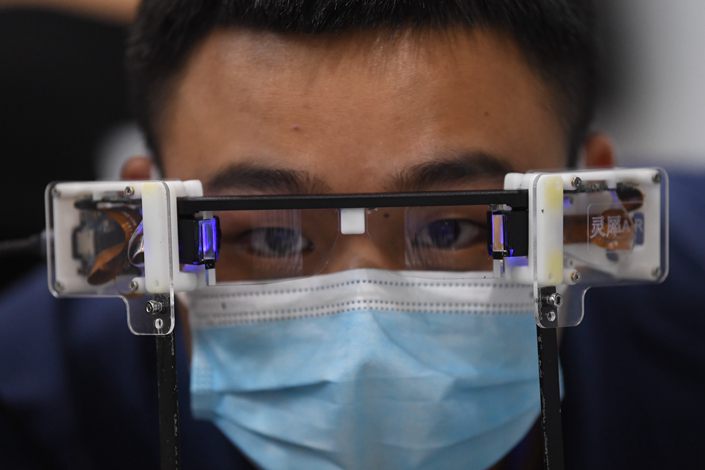 A visitor tries out a set of AR glasses on Sept. 17 at an industry event in Beijing.

Proponents prophesize that AR will be the future of how people will interact with technology, replacing touchscreens the way touchscreens replaced keys and buttons. At its most basic, the technology overlays virtual information on real-world objects or environments.

Imagine looking at the intersection outside your office through a pair of AR glasses — or your smartphone camera — and seeing the name of the street, the closest street address, directions to your favorite lunch spot, or any other useful information you can currently call up from your smartphone’s map app.

The Covid-19 pandemic has sparked wider interest in AR applications. Since it began, HiAR has been fielding requests from Chinese firms looking to create remote working environments through AR, according to its founder and CEO, Liao Chunyuan.

But mass production of AR devices will still hinge on everyday consumers, rather than companies looking to solve technical challenges in the way that Xiangtan Iron & Steel was.

Several Chinese companies are making AR sets designed for the consumer market, in hopes that the launch of 5G wireless service will drive interest in the tech.

“With the spread of 5G technology, many AR applications have gone into the fast lane,” said Liao Chunyuan, founder and CEO of HiAR.

However, the market has been a tough nut to crack. Many consumers have been turned off by AR devices’ complicated functions and high price tags, which in China easily equate to a month’s salary for a white-collar professional in the wealthy city of Shanghai. According to estimates by TrendForce, a Taiwan-based market researcher, some 450,000 AR devices will be sold worldwide this year. That’s equal to just over 1% of the number of iPhones produced in the second quarter of this year alone.

HiAR was one of the first Chinese startups to try its hand at AR. It has been a challenge. In 2012, Google LLC. released the first generation of Google Glass, which famously flopped. That year, Liao left his job at the FX Palo Alto Laboratory to start his own company in Shanghai. It has since attracted a roster of investors, include Meitu Inc., the company behind the eponymous selfie beautification app, and venture firm GGV Capital.

Making AR more palatable for consumers is a balancing act between price and usability. When HiAR was making its first mass-produced AR set, the G100, which it priced at more than $2,500, the team used the most advanced technology available at the time, including a 3D camera to identify hand gestures. Customers took little notice of the tech and instead complained that the 10-ounce device was too heavy, the battery was too difficult to replace and the size and heat it generated left them, well, sweaty.

The 3D camera needed to recognize hand gestures not only added to the price, but also the power drain on the batteries, not to mention the steeper learning curve for users, Liao said.

The lesson HiAR learned was to put the needs of users ahead of flashy tech. Its latest model, the G200, ditched gesture recognition and replaced the 3D camera with a conventional one.

“Sometimes, you have to remove functions instead of adding them,” Liao said.

Some specialized functions have proven popular with consumers. Engineers from Rokid Inc., a Hangzhou-based startup, added an infrared thermometer module to their AR sets, which allowed users to check a person’s body temperature from a distance. The product sold out multiple times this year. Still, company founder Zhu Mingming isn’t terribly optimist about AR’s potential for the consumer market due to current technical limitations, such as battery life. “So general applications are not that valuable,” Zhu said.

Apple of their eye

Looking to boost its standing among consumers, the AR industry has its eyes on iPhone-maker Apple Inc. The company launched a framework for software developers called ARKit in 2017, but hasn’t had much to do with the technology since. In March, however, Apple surprised many AR professionals by adding a lidar sensor to its highest-end smartphones and tablets. Industry observers see the addition of the sensor — which allows devices to measure depth in a much more sophisticated way — as a game changer for AR.

Apple’s move may also solve some of AR’s existing technical problems. 3D visualization has been difficult to crack for the industry, said Wang Guangxi, the managing director of Lenovo Capital. Apple devices — armed with lidar sensors and cameras that can accurately perceive three-dimensional space — would allow AR applications to flourish, he said.

Apple could also serve as a standard-setter for the industry. To make a good product, other AR-device makers all need to coordinate with chipmakers and software designers, which makes it hard to reach a consensus, Wang said. But once Apple is firmly in the business, a consensus could be reached and the industrial chain would catch up.

Tech giants like Google, Samsung Electronics Co. Ltd., and Huawei are also making forays into AR. At its developers’ conference in 2019, Huawei showcased a set of AR glasses. The product has not been made available to the public, but the big tech firms are all expected to follow Apple into the race.

Cao Zhuoshao, an analyst at TrendForce, thinks that adding an AR application on mobile might be the first step to persuading consumers to open their wallets for pricey AR sets. Only when there are enough applications will device-makers be able to sell AR sets as smartphone accessories, much in the same way smartwatches are marketed. Cao predicted that this was likely to happen within three years.

Rokid’s Zhu said that the AR industry has little to do with the actual technological capabilities of the companies involved. It advances in fits and starts. “There are no magic bullets in this industry,” he said.