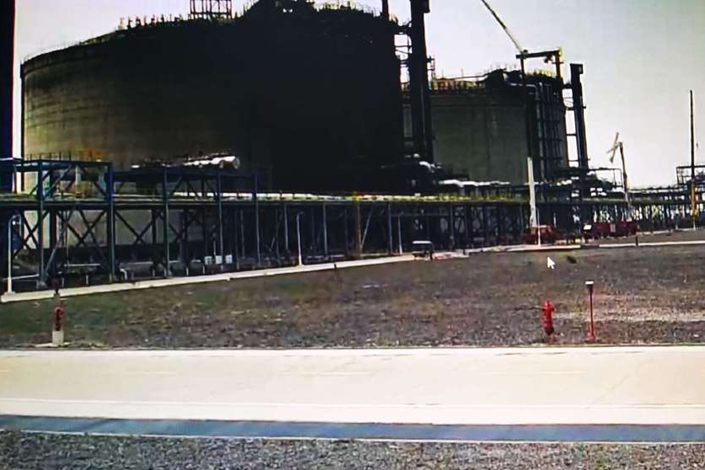 Six people were killed and three seriously injured when a fire broke out at a liquefied natural gas (LNG) terminal in the southern port city of Beihai in the Guangxi Zhuang autonomous region, the terminal’s operator said.

The fire broke out about 11:45 a.m. Monday as a pipeline for the second phase of the Beihai LNG project was under construction, according to the recently formed China Oil and Gas Pipeline Network, also known as PipeChina. The fire was extinguished within 15 minutes, it added, according to an updated account of the incident posted on Tuesday (link in Chinese).

The Guangxi fire and rescue corps said on its official Weibo account that the fire broke out at the No. 2 storage tank in the Tieshan port area of Beihai. By the time the squad arrived, the blaze was already extinguished, it added.

Of the nine people at the accident site, five were initially reported killed and another three suffered serious injuries, with one person reported missing, according to PipeChina. An official microblog operated by the city of Beihai later said the missing person had been found and had also died in the fire.

Video seen by Caixin that appeared to come from the scene showed people dressed in purple and red scurrying to get away from the fire and thick smoke while yelling “Run, run!” as flames burned at twice the height of an LNG storage tank.

The accident occurred at China’s first such LNG terminal area in its southern region. It was previously operated by leading oil refiner Sinopec, and was handed over on Oct. 1 to be operated by PipeChina, a newly formed entity that operates many of the pipeline assets previously owned by China’s major energy companies. The terminal supplies natural gas to 14 cities in Guangxi and the neighboring Guangdong province, and received 2.86 million tons of LNG in 2019.

Construction began on the terminal in 2013, and it began operating in 2016. It can receive up to 6 million tons of LNG per year, with that amount planned to rise to 10 million tons over the long term. China is placing a growing emphasis on LNG and other cleaner-burning and renewable energy sources as part of its longer term plans to wean the country off its heavy reliance on coal.

The project was designed with four storage tanks, each 40 meters high, with 0.8 meter thick walls and an inner diameter of 82 meters.

The cause of the accident remains under investigation.