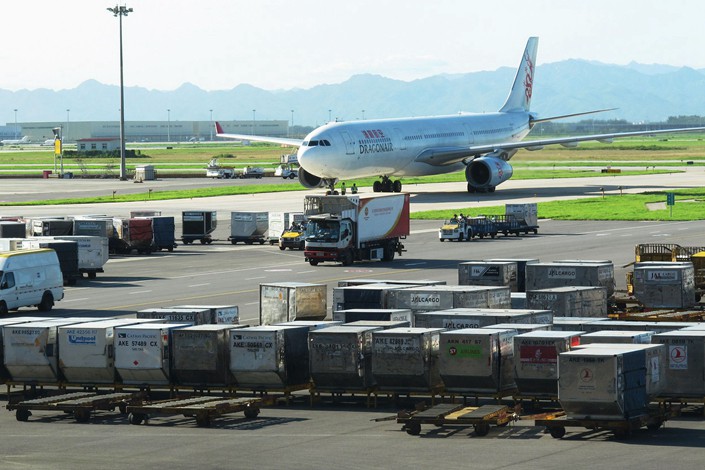 The race to market by three of China’s largest government-owned freight firms could be seen as a success story for state-owned enterprise reforms. But it’s also the final nail in the coffin for state ambitions to create a consolidated cargo giant with the heft to take on truly global firms like Germany’s DHL.

Eastern Air Logistics Co. Ltd., which was spun off of China Eastern Airlines Corp. Ltd. in 2017, is expected to go public this month on Shanghai Stock Exchange, Caixin has learned.

It is being closely tailed by two other major airlines’ cargo units: China Southern Airlines received regulatory approval Tuesday to spin off its freight unit, and Air China Cargo Co. Ltd., which was a unit of Air China until 2018, is also seeking to list.

The moves show China’s state-owned cargo giants have found an unusual way to boost their financial performance — letting private firms buy stakes before going public. China Southern and Air China Cargo have put out notices aiming to bring in investors to hold up to 31% and 49.5% stakes, respectively.

Their prospects have changed dramatically over the last five years. In 2015, the central government pushed to consolidate the three in an effort to improve their financial performance and take on international giants like Fedex and DHL.

But the proposal was not well-received, and none were interested in giving up any control to the others. Beijing changed tack a year later, launching mixed ownership reforms of state-owned enterprises including the three airlines, in a bid to attract capital and improve productivity. Eastern Air Logistics was among the first selected for the pilot.

The experiment seems to have worked, at least for Eastern Air Logistics, which completed a share selloff in 2017 that brought in nearly 2.3 billion yuan ($343.9 million), helping reduce its debt-to-asset ratio by more than a tenth to 75% that year. Eastern Air Logistics had the best financial performance of the trio in 2019 with a profit of 789 million yuan, thanks in part to its ability to shed debt following the capital injection.

The firm filed its Shanghai IPO prospectus in July and may debut as soon as this month, Caixin has learned. But if Air China Cargo and the logistics unit of China Southern Airlines follow the same path as planned, China’s hope of creating a truly global competitor will be even further out of reach.

Once they list separately, the possibility of a merger will be low, both from a technical and regulatory perspective, according to Yu Zhanfu, a partner in consulting firm Roland Berger’s Beijing office.

And with the three companies in better financial shape, there’s less impetus to combine them, said Zhu Yimin, a vice president of China Federation of Logistics and Purchasing. The idea made more sense in 2015 when the trio were mired in debt and could benefit from reducing competition, but they were all profitable in 2019.

And even if they were consolidated, Zhu added, China would struggle to develop a global freight transporter due to factors outside its control. China just doesn’t have the necessary industrial conditions and is already substituting for imported products, and Western countries don’t have enough faith in Chinese cargo companies to let them manage large volumes of international freight, so it would be difficult for them to build a global network.