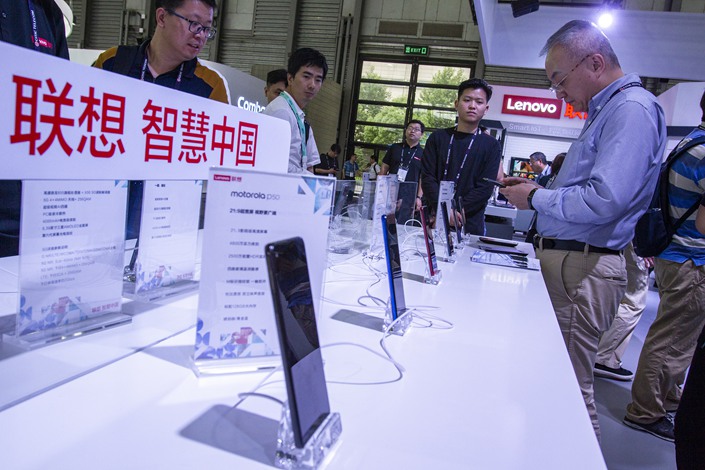 Losses from the company’s smartphone business narrowed 56% in the third quarter to $22 million.

The long-ailing smartphone arm of Chinese electronics-maker Lenovo Group Ltd. trimmed its losses by half, its interim third quarter results show, as its strategy focused on the domestic market and higher-end offerings bears fruit.

Lenovo’s China region President Liu Jun said in a financial call Tuesday that the unit will focus on developing high-performance products for business and gaming in the China market. These more premium segments of the country’s market have grown as part of a general trend of upgrading consumption in the East Asian nation, he added.

Losses from the company’s smartphone business narrowed 56% in the third quarter to $22 million. This came as Lenovo rolled out more expensive handsets, with its phone prices as a whole rising 10% from the preceding quarter.

It released a new version of its flagship Legion gaming smartphone this month, with handsets running between 3,499 yuan ($524) and 5,999 yuan. And in September, it launched its first 5G-powered Motorola Razr smartphone with a flexible screen for 12,499 yuan.

“We have suffered a lot, because blindly pursuing volume puts pressure on profitability,” Lenovo Group CEO Yang Yuanqing said on the call. He said he expects the new strategy to help the smartphone unit turn a profit in the next quarter.

Lenovo’s smartphone business has not posted an annual profit since it acquired Motorola from Google in 2014 for $2.9 billion, as it struggled to integrate the U.S. company’s assets and operations into its own business.

The company then downscaled its business in the sector and turned its focus to the North America and Latin America markets. It also resorted to a cost-cutting strategy to prioritize its main PC business.

As the smartphone market contracted during the pandemic, and Lenovo faced fierce competition from lower-end manufacturers such as Xiaomi and Oppo, its shipments dropped 4% to 10.2 million units in the third quarter, making it 9th among global smartphone makers, according to intelligence firm IDC.

The Hong Kong-listed company had a 2.8% share of the global smartphone market in the second quarter, according to data from research institute Canalys, slightly lower than last year.

In a bright spot, Lenovo’s PC and smart device business retook the global No. 1 spot with a 24.3% market share in the third quarter, delivering nearly 20 million PCs, according to Canalys.

Lenovo is aiming to deliver a total of 300 million PCs in 2020, which would represent 9% year-on-year growth and exceed its previous target by 40 million. However, Yang said the company is facing a shortage of components as manufacturers were impacted by the pandemic.

Fueled by the strong performance of the PC sector as people worldwide continued to work and play at home during the pandemic, Lenovo’s profits surged 43% to $350 million on revenue of $14.52 billion, which was up 7%.