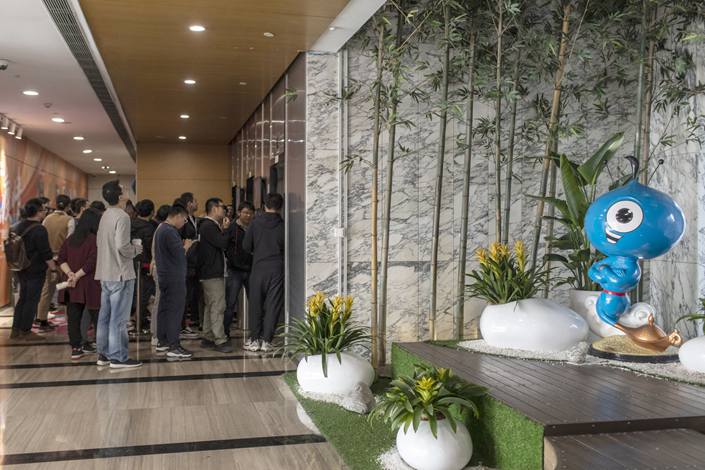 Employees line up for elevators near a company mascot during lunch hour at one of Ant Group Co.'s offices in Hangzhou on Nov. 2. Photo: Bloomberg

(Bloomberg) — For bankers, Ant Group Co.’s initial public offering was the kind of bonus-boosting deal that can fund a big-ticket splurge on a car, a boat or even a vacation home. Hopefully, they didn’t get ahead of themselves.

Dealmakers at firms including Citigroup Inc. and JPMorgan Chase & Co. were set to feast on an estimated fee pool of nearly $400 million for handling the Hong Kong portion of the sale. Instead, they were left reeling after the listing there and in Shanghai abruptly derailed days before the scheduled trading debut. Top executives close to the transaction said they were shocked and trying to figure out what lies ahead.

And behind the scenes, financial professionals around the world marveled over the surprise drama between Ant and China’s regulators and the chaos it was unleashing inside banks and investment firms. Some quipped darkly about the payday it’s threatening. Banks on the Hong Kong initial public offering haven’t yet been paid any sizeable fees on the transaction, since nearly all were tied to the completion of the deal, people with knowledge of the matter said.

The silver lining is the about-face is so unprecedented that it’s unlikely to mean any broader issues for underwriting stocks in Asia.

“China’s regulatory risks are certainly being highlighted, but I don’t expect that to encourage more Chinese companies flocking to seek IPOs in the U.S.,” Steven Leung, a Hong Kong-based executive director at UOB Kay Hian, said by phone Wednesday. “When China imposes regulatory changes, if that’s going to affect your business, it will have an impact regardless of where your listing venue is.”

Employees line up for elevators near a company mascot during lunch hour at one of Ant Group Co.'s offices in Hangzhou, China, on Monday, Nov. 2, 2020. China warned Jack Ma and senior Ant executives that the fintech giant will face new curbs on its expansion, highlighting growing regulatory risk for the world’s largest initial public offering just days before its trading debut.

One senior banker whose firm was on the deal said he was floored to learn of the decision to suspend the IPO when the news broke publicly. Speaking on condition he not be named, he said he didn’t know how long it might take for the mess to be sorted out and that it could take days to gauge the impact on investors’ interest.

Meanwhile, institutional investors who planned to buy into Ant described reaching out to their bankers only to receive legalistic responses that demurred on providing any useful information. Some bankers even dodged inquiries on other subjects.

Four banks leading the offering are still likely receive a nominal payment for their work. Citigroup, JPMorgan, Morgan Stanley and China International Capital Corp. were sponsors of the Hong Kong IPO, putting them in charge of liaising with the exchange and vouching for the accuracy of offer documents.

Sponsors get top billing in the prospectus as well as a small additional fee for their trouble, which Ant’s lead banks are still expected to receive, according to one of the people. Still, such payments pale in comparison to the windfall generated by bringing in investor orders.

With the deal on hold, Ant’s Hong Kong IPO banks haven’t yet received any underwriting commissions, the people said. Ant had been planning to pay as much as 1% of the offering size, totaling up to $198 million, according to a filing.

While that was lower than the average fees tied to Hong Kong IPOs, the deal’s magnitude guaranteed that taking Ant public would be a bonanza for banks. Brokerage fees that would have reached as much as $178 million have also vanished, the people said, asking not to be identified because the information is private.

While it’s unclear exactly how much underwriters will ultimately be paid, for now it’s unlikely to be much more than compensation for their expenses until the deal is revived. Ant hasn’t publicly disclosed the fees for the Shanghai portion of the proposed IPO.

Representatives for Ant and its top IPO banks declined to comment or didn’t immediately respond to requests.

“Generally speaking, companies have no obligation to pay the banks unless the transaction is completed and that’s just the way it works,” said Lise Buyer, managing partner of the Class V Group, which advises companies on initial public offerings. “Are they bummed? Absolutely. But are they going to have trouble keeping dinner on the table? Absolutely not.”

For now, bankers will have to focus on salvaging the deal and maintaining investor interest.

Demand was no problem the first time around: The dual listing attracted at least $3 trillion of orders from individual investors. Requests for the retail portion in Shanghai exceeded initial supply by more than 870 times.

“But sentiment is certainly hurt,” Kevin Kwek, an analyst at AllianceBernstein, wrote in a note to clients. “This is a wake-up call for investors who haven’t yet priced in the regulatory risks.”