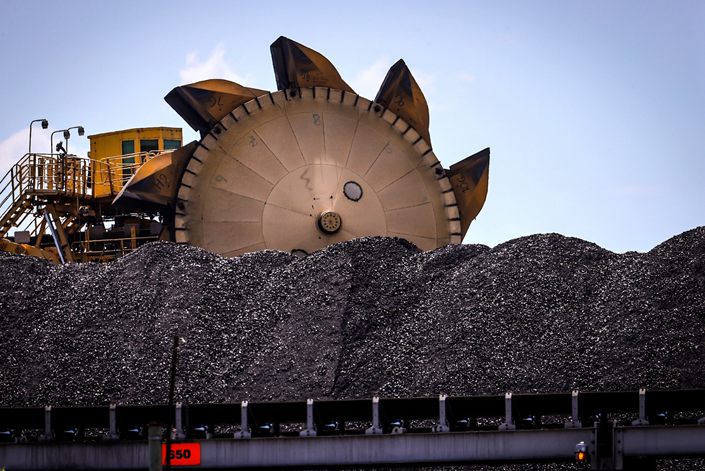 A bucket-wheel reclaimer stands next to a pile of coal at the Port of Newcastle in Newcastle, New South Wales, Australia, on Oct. 12. Photo: Bloomberg

(Bloomberg) — Australian exporters are on high alert on Friday as the deadline arrives for traders in China, its biggest market, to stop buying at least seven categories of the country’s commodities.

China’s government has ordered a halt to imports of products including coal, barley, copper ore and concentrate, sugar, timber, wine and lobster, people familiar with the situation said earlier this week. The government has ordered the halt to begin on Friday, one of the people said, asking not to be identified as the information is sensitive.

The industries mentioned as targets of trade action by China represented about 7% of Australia’s total goods exports, or A$27.15 billion ($19.7 billion), in 2019-20, Commonwealth Bank Economics said Friday in emailed comments.

Australia’s Trade Minister Simon Birmingham on Friday called the reports of trade sanctions “rumors,” warning people to “exercise caution and not jump to conclusions at this point in time.” China had given assurances that there was “no concerted action of discrimination against Australia,” he told reporters.

Still, he called on Beijing to engage in “mature, responsible dialog,” adding that it was disappointing that China refused to engage on a ministerial level.

Meanwhile, Australia’s agriculture department warned that there had recently been delays of shipments on entry to China, leading to commercial losses. It encouraged exporters to fully consider the potential risks.

China’s order represents a dramatic deterioration in ties, which have been strained since Australia barred Huawei Technologies Co. Ltd. from building its 5G network in 2018 on national security grounds. Relations have been in free fall since Prime Minister Scott Morrison’s government in April called for an independent probe into the origins of the coronavirus.

China has already barred meat imports from several Australian meatworks, delayed lobster shipments from clearing customs, applied tariffs of more than 80% to barley, and said it won’t allow timber from Queensland state because of pests. Wine is also under an anti-dumping investigation while Chinese power stations and steel mills have been told to stop using Australian coal. Cotton purchases have also been suspended.

“We are super nervous, it for sure will affect the market and affect the business,” she said Thursday at a trade expo in Shanghai. “If it’s true, it might mean a lot of wine importers have to change their career path.”

Australia is working through the issues “commodity by commodity” and will continue to work collaboratively with officials in Beijing, agriculture minister David Littleproud said Friday on radio station 4BC.

“We are a rules-based global trading partner, and we expect those that we trade with, in fact, to stick to those rules as well,” he said.