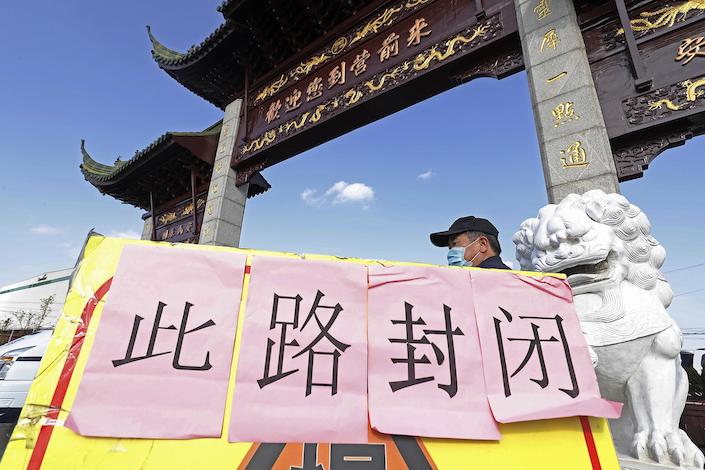 Yingqian village in Pudong, Shanghai, was locked down after a new Covid-19 case was found.

The case appeared as Shanghai is hosting the China International Import Fair (CIIE), a huge trade expo that China is promoting as a major step toward further opening up its economy. The event started Nov. 5 and is set to end Tuesday.

On Sunday, health officials in the northern city of Tianjin reported that a 38-year-old person who also works as a cargo handler contracted Covid-19. A 47-year-old male truck driver who recently delivered frozen foods in the area where the first man is believed to have been infected was confirmed with the coronavirus Monday.

The new cases prompted an order to disinfect all overseas shipments of cold-chain products before they are handled by customs, transportation, storage, wholesale or retail workers, according to a notice issued by the State Council, China’s cabinet.

Wu Jinglei, the head of Shanghai’s health commission, said the Shanghai patient did not recently come into contact with frozen products nor had he been involved with the CIIE over the course of his work.

The Pudong Airport worker was hospitalized Sunday after he showed symptoms including fever, nasal congestion and fatigue, local health officials said Monday at a news conference.

The patient lives in Zhujiao town in the Pudong New Area, about six miles from Pudong Airport, where he worked as a cargo handler since April. The patient said he hasn’t left Shanghai or had contact with any confirmed coronavirus cases recently. The source of the infection is unknown.

The city locked down Yingqian village where the patient lives and is testing all village residents. The risk level in Yingqian has been raised to medium, but the risk level for other parts of Shanghai remains unchanged, local health authorities said.

Yingqian village has a few thousand residents, many of whom work at Pudong Airport and a nearby logistics park, a villager told Caixin.

As of Monday afternoon, 26 people who had close contact with the patient were tested. Among them, 23 tests were negative. Three people working in a grocery market where the patient visited during the past 14 days are awaiting results.

As of Monday, Shanghai had 1,254 confirmed Covid-19 cases, 912 of which were imported. The last time Shanghai reported a locally transmitted case was in June.

China has brought the pandemic largely under control, but sporadic outbreaks have continued to occur, with recent cases in places such as Qingdao and Xinjiang.