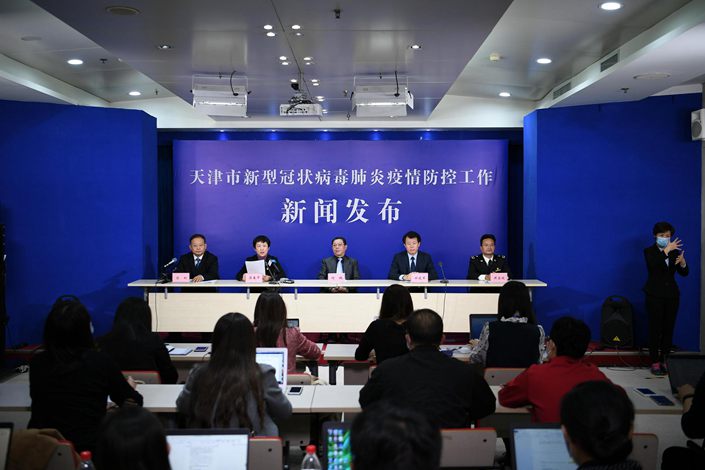 China issued new guidelines on disinfecting shipments of imported frozen foods on Monday, after another cargo handler was diagnosed with Covid-19 following exposure to contaminated packaging.

Cold-chain food shipments will undergo “thorough preventative sterilization” before being handled by customs, transportation, storage, wholesale or retail workers, according to a notice (link in Chinese) announced by the State Council, China’s cabinet.

Government officials should also strengthen disinfection of cold storage facilities and ensure that all the affected goods are recorded and traceable, the notice says.

The announcement follows a spate of new Covid-19 cases among Chinese cargo workers who have come into contact with frozen or refrigerated imported goods. The novel coronavirus which causes the disease is thought to be able to remain active for long periods in the frigid temperatures in which such goods are typically transported.

On Sunday, health officials in the northern city of Tianjin confirmed that a 38-year-old cargo handler had contracted Covid-19.

The man from the northeastern city’s Binhai New Area was diagnosed after loading and unloading part of a shipment of imported frozen food whose packaging was later found to be tainted with the coronavirus, according to state broadcaster CCTV.

On Monday, Tianjin health authorities confirmed (link in Chinese) another asymptomatic case in a 47-year-old male truck driver who recently delivered frozen foods in the area where the first man is believed to have been infected.

At a press conference on Sunday, Zheng Jianjun, the deputy director of Tianjin’s market regulator, said officials in the nearby city of Dezhou had raised the alarm after the outer packaging of a shipment of frozen pork knuckles from Germany tested positive for the virus.

Tianjin health authorities said 11 other people exposed to the same shipment all tested negative for the virus, as did a further eight people identified as the infected man’s close contacts.

Some 156 people living in the building where the tainted goods were stored have also undergone tests for the virus, officials added.

He Peng, a spokesperson for Tianjin’s municipal health commission, said at the Sunday press conference that the potential outbreak was “generally controllable” and that the city planned to test all cold chain workers for the virus.

The public “should not panic” but must “continue to willingly comply with disease prevention and control measures” such as limiting gatherings and wearing face masks, He said.

The findings followed a number of Covid-19 cases linked to sullied frozen goods, including infections in the port cities of Qingdao and Dalian as well as the capital, Beijing.