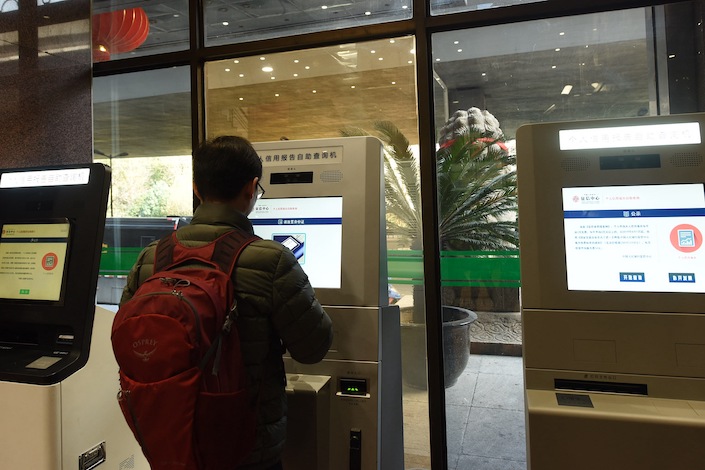 A user checks a personal credit report at a self-service kiosk supported by the PBOC credit reporting system.

Global personal credit reference giant Experian plans to exit the Chinese mainland market and is talking with potential buyers about selling its China business. Its departure will leave a credibility vacuum in a chaotic but important sector, industry analysts say.

Analysts attributed Experian’s planned departure to Chinese regulators’ cautious attitude toward foreign players in the personal credit information market. In a disorderly competition with excessive collection and abuse of personal information by some local big data companies, foreign players that focus on compliance are at a disadvantage, they said. Experian, with its Asia and Pacific business contributing about 8% of group profit, has been suffering huge losses and a shrinking market share in China, several industry participants said.

The company has undergone considerable portfolio streamlining over the past two years, sources at Experian told Caixin. After a strategic review, the company decided to spin off its stake in Chinese subsidiaries and leave the Chinese mainland market while maintaining its business in Hong Kong and Taiwan, the sources said.

China’s strong economic growth and booming consumer lending over the past few decades have generated large unmet demand for financial services, especially in the consumer and corporate credit sector. The State Council, China’s cabinet, published a framework in 2014 for establishing a comprehensive and well-regulated social credit system by 2020.

“Nobody want the domestic credit information market to be dominated by controversial players,” the industry participant said.

Baihang Credit Scoring, a central bank-backed private credit provider, was launched in 2018 to collect information from lending channels outside the traditional financial system, such as consumer finance firms, online lenders and peer-to-peer (P2P) platforms, to rate the creditworthiness of consumers. The idea was to supplement the PBOC credit reporting database, which primarily gathers data from banks and other traditional lenders.

Industry participants said the PBOC database and Baihang Credit are far from meeting market demand. A report by the European Union Chamber in China said that while the databases have a large amount of data, China’s credit information system hasn’t been fully implemented

Experian’s exit will take place in several phases, and the company’s mainland operations are expected to fully shut down by April 2021, Caixin learned from multiple sources.