By Shen Xinyue and Timmy Shen 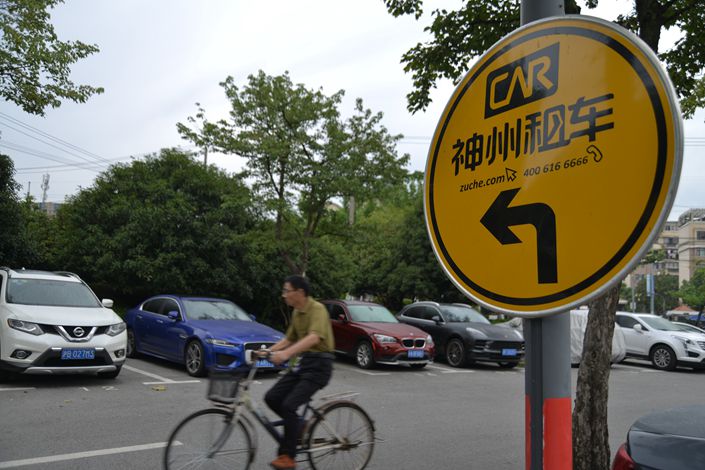 A limousine services provider controlled by Lu Zhengyao, founder of scandal-plagued Luckin Coffee Inc., has agreed to sell its stake in a major car rental company at a large premium, as Lu seeks cash to prop up his struggling business empire.

Private equity firm MBK Partners has agreed to acquire the 20.86% stake in Hong Kong-listed Car Inc. from Ucar Inc. for nearly HK$1.8 billion ($232 million), according to a Tuesday filing with the Hong Kong Stock Exchange.

The deal would see MBK’s Indigo Glamour Co. Ltd. unit buy 442.6 million shares from Ucar for HK$4 per share, according to the filing — representing a large premium over the stock’s Tuesday closing price of HK$3.23.

In June, Ucar had previously agreed to sell the stake to Beijing Automotive Group Co. Ltd. (BAIC Group), a major carmaker whose joint venture partners include Germany’s Daimler AG. But that deal wasn’t completed before the long stop date, Car said in the latest filing. No price was given for that earlier transaction, though Car Inc.’s stock price was significantly lower at that time than its present levels.

A source close to Car Inc.’s board told Caixin the company’s stock has seen some gains recently, and that BAIC gave up the deal mainly due to the climbing stock price.

Car Inc.’s stock plummeted in April after Luckin revealed it had faked huge amounts of sales last year. Luckin’s own stock fell even more, losing most of its value, and was ultimately delisted from the Nasdaq.

But shares of Car Inc., which is much older and was profitable before this year’s Covid-19 outbreak, have performed well since late October, surging roughly 40% in the eight trading days starting Oct. 30.

Upon completion of the deal, MBK will become the second largest shareholder of Car Inc. after Legend Holdings, parent of PC giant Lenovo, which owned 26.6% when Car Inc. filed its interim report in September.

Meanwhile, Ucar, which is controlled by Luckin founder Lu, who also goes by Charles Lu, will exit any remaining roles at the car rental firm. In June, Lu resigned as Car Inc.’s chairman and a member of its board. A sale of the Ucar stake would end the financial relationship between Lu and the car rental business that was one of the core companies of his older business empire centered on car services.

Caixin has learned from a source close to Car Inc. that several of its top executives were considering leaving their management roles. MBK had no comment over whether it intended to push for a management overhaul after completion of its stake purchase.

Founded in 2005, MBK Partners has about $22 billion worth of assets under management with a focus on North Asian markets, including China, Japan and South Korea. Within the car rental sector, it has previously invested in China’s eHi Car Services Ltd. and South Korea’s KT Rental.

A spokesperson at MBK told Caixin that Car Inc.’s long-term development is in line with that of China’s overall car rental industry. The person said there’s large potential for market growth as penetration of car rental services is low, taking less than 1% of the entire transportation services market.

Before the Luckin scandal, Ucar was Car Inc.’s largest shareholder with a 29.8% stake, though that had been pledged as collateral. After the scandal broke, Ucar sold some of its Car Inc. shares in the secondary market, reducing its stake and making Legend Holdings the largest single shareholder.