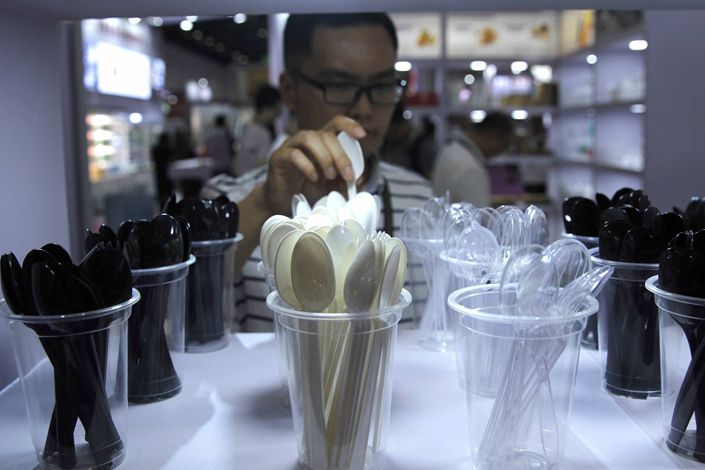 Plastic tableware on display at a trade show in Beijing on July 2, 2019.

As localities around China heed the national government’s call to cut plastic waste, Beijing has announced that it will seek to make the 2022 Winter Olympics a showcase for its efforts.

According to a 10-point plan issued by the capital’s economic planning and environmental authorities on Tuesday, certain kinds of single-use plastic products will be banned from use in any Olympic venues, accommodation for the competition, as well as in related businesses.

According to staff at the city’s Olympics organizing committee, the events will use biodegradable tableware rather than banned disposable plastic implements.

The plan says that all kinds of plastic use should be minimized as far as possible “without excessively affecting public viewing” of the competition.

The 2022 Winter Olympics will be held across three areas in central Beijing, the capital’s suburb of Yanqing and mountainous Zhangjiakou across the border in neighboring Hebei province.

Much of the non-Olympic related parts of the city’s five-year plastic waste action plan are largely in line with guidelines issued by the national economic planning and environmental administrations in January.

That plan sets out a series of deadlines for the elimination of certain kinds of disposable products, including significantly reducing the use of disposable plastic in e-commerce, express deliveries and takeaway food by 2022. By 2025, the nation will also establish a system for producing, distributing, consuming, recycling and disposing of plastic products, it says.

Besides the Beijing guidelines’ focus on the Olympics, they also describe how government institutions will be assessed on their use of disposable plastic products, with the use of bottled water, tableware and plastic pens specifically mentioned.

Also to be evaluated are supermarkets, e-commerce companies, delivery services and the postal system, which will be required to report their use and recycling of disposable plastic reports.