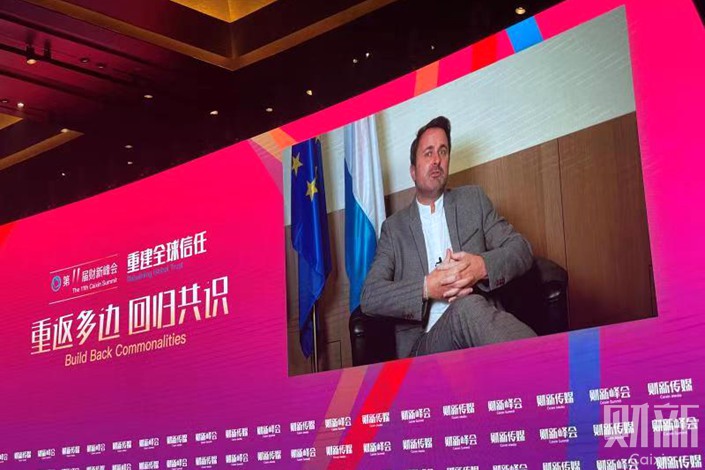 The prime minister of Luxembourg has called for major reforms to multilateral institutions to plug the gaps of distrust in globalization amid the Covid-19 pandemic.

Xavier Bettel, who has led the European country’s government since 2013, told the Caixin Summit on Friday that “the world is in a desperate need of effective multilateralism and cooperating across borders” to fight against the coronavirus.

However “we live in an era of doubts and questions about the global order” and are “witnessing a loss of trust in multilateral institutions and among international trade, and also investment, partners.”

The 47-year-old said the most outstanding example of the distrust of global institutions is in the context of trade and foreign direct investment, where “unilateral actions and risk of retaliations” have become rampant.

“International cooperation, rather than unilateral actions, is the only sure way to avoid the risk of escalation,” he said.

Bettel’s comments came as international institutions such as the World Trade Organization (WTO) have been facing growing criticism over their effectiveness.

The WTO has been stuck in a stalemate since members of the global trade watchdog failed to agree on the selection of its next director-general last month.

The Office of U.S. Trade Representative (USTR) called for WTO reform in the wake of the body’s failure to agree, saying in a statement that “there have been no multilateral tariff negotiations in 25 years, the dispute settlement system has gotten out of control, and too few members fulfill basic transparency obligations.”

The Luxembourg prime minister warned that “globalization will not receive broad support unless it is based on free and first-rate investment practices.”

He said that countries “have to cooperate to update rules and institutions according to the growing sophistication and complexity of the global economy.”

Bettel also hailed the cooperation between EU and China on climate change and sustainable economy. “China and EU have been pulling in the same direction, supporting our multilateral commitments to combat global climate change,” he said.

He said that China’s goal of carbon neutrality by 2060 “creates the needed momentum to speed up green development ... and will further drive the growth of sustainable finance.”

According to an analysis by U.S. consultancy Boston Consulting Group, the world’s largest greenhouse gas producer should slash its emissions by up to 85% by 2050 to hit its bold carbon neutrality target.

Most of the reductions — about 70% — will depend on a rapid decline in fossil fuel consumption and its replacement with renewables like solar and wind, the report said, adding that this would require up to 100 trillion yuan ($14.9 trillion) of investment between now and 2050.